A man washed up on a beach after a shipwreck. Only a sheep and
a sheepdog were washed-up with him. After looking around, he
realized that they were stranded on a deserted island.

After being there awhile, he got into the habit
of taking his two animal companions to the
beach every evening to watch the sunset.

One particular evening, the sky was a fiery red
with beautiful cirrus clouds, the breeze was
warm and gentle - a perfect night for romance.

As they sat there, the sheep started looking better
and better to the lonely man. Soon, he leaned over
to the sheep and put his arm around it.

The sheepdog, ever-protective of the sheep,
growled fiercely until the man took his
arm from around the sheep.

After that, the three of them continued
to enjoy the sunsets together, but
there was no more cuddling.

A few weeks passed-by and, lo and behold,
there was another shipwreck. The only
survivor was Hillary Clinton.

That evening, the man brought Hillary to the
evening beach ritual. It was another beautiful
evening - red sky, cirrus clouds, a warm and
gentle breeze - perfect for a night of romance.

Pretty soon, the man started to get those feelings
again. He fought the urges as long as he could but
he finally gave-in and leaned over to Hillary and
told her he hadn't had sex for months.

Hillary batted her eyelashes and asked if
there was anything she could do for him.

David Spade has it right, it is weird.

This illustrates the true nature,  soul,  character of the hilldog during Christmas.   The repubics all stayed with the Christmas spirit...at least for Christmas right???

This is the story from the Blaze.

Not the hilldog, on the other hand she just has nothing else on her mind other than that quest for power (megalomaniac),  her agenda,   at all costs,  the hilldog must win.  I now pray the DOJ does the right thing and indicts the hilldog.  here is the hilldog tweet on Christmas....she has an ugly soul. 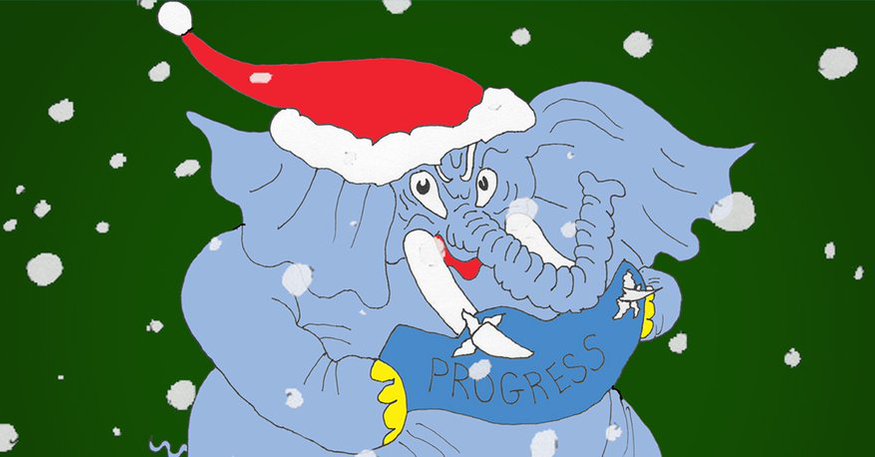 Kinda looks like hilldog in an elephant kinda way>>>

The idiot and company in charge, didn't listen.

They are too arrogant to listen.

More proof barri and company are idiots,  and more proof we don't need another bushey.

It explains a lot of the stupid moves by this admin..........Here is the article so you don't have to submit.

Barack Obama’s repeated insistence that Bashar al-Assad must leave office – and that there are ‘moderate’ rebel groups in Syria capable of defeating him – has in recent years provoked quiet dissent, and even overt opposition, among some of the most senior officers on the Pentagon’s Joint Staff. Their criticism has focused on what they see as the administration’s fixation on Assad’s primary ally, Vladimir Putin. In their view, Obama is captive to Cold War thinking about Russia and China, and hasn’t adjusted his stance on Syria to the fact both countries share Washington’s anxiety about the spread of terrorism in and beyond Syria; like Washington, they believe that Islamic State must be stopped.

The military’s resistance dates back to the summer of 2013, when a highly classified assessment, put together by the Defense Intelligence Agency (DIA) and the Joint Chiefs of Staff, then led by General Martin Dempsey, forecast that the fall of the Assad regime would lead to chaos and, potentially, to Syria’s takeover by jihadi extremists, much as was then happening in Libya. A former senior adviser to the Joint Chiefs told me that the document was an ‘all-source’ appraisal, drawing on information from signals, satellite and human intelligence, and took a dim view of the Obama administration’s insistence on continuing to finance and arm the so-called moderate rebel groups. By then, the CIA had been conspiring for more than a year with allies in the UK, Saudi Arabia and Qatar to ship guns and goods – to be used for the overthrow of Assad – from Libya, via Turkey, into Syria. The new intelligence estimate singled out Turkey as a major impediment to Obama’s Syria policy. The document showed, the adviser said, ‘that what was started as a covert US programme to arm and support the moderate rebels fighting Assad had been co-opted by Turkey, and had morphed into an across-the-board technical, arms and logistical programme for all of the opposition, including Jabhat al-Nusra and Islamic State. The so-called moderates had evaporated and the Free Syrian Army was a rump group stationed at an airbase in Turkey.’ The assessment was bleak: there was no viable ‘moderate’ opposition to Assad, and the US was arming extremists.

Lieutenant General Michael Flynn, director of the DIA between 2012 and 2014, confirmed that his agency had sent a constant stream of classified warnings to the civilian leadership about the dire consequences of toppling Assad. The jihadists, he said, were in control of the opposition. Turkey wasn’t doing enough to stop the smuggling of foreign fighters and weapons across the border. ‘If the American public saw the intelligence we were producing daily, at the most sensitive level, they would go ballistic,’ Flynn told me. ‘We understood Isis’s long-term strategy and its campaign plans, and we also discussed the fact that Turkey was looking the other way when it came to the growth of the Islamic State inside Syria.’ The DIA’s reporting, he said, ‘got enormous pushback’ from the Obama administration. ‘I felt that they did not want to hear the truth.’

‘Our policy of arming the opposition to Assad was unsuccessful and actually having a negative impact,’ the former JCS adviser said. ‘The Joint Chiefs believed that Assad should not be replaced by fundamentalists. The administration’s policy was contradictory. They wanted Assad to go but the opposition was dominated by extremists. So who was going to replace him? To say Assad’s got to go is fine, but if you follow that through – therefore anyone is better. It’s the “anybody else is better” issue that the JCS had with Obama’s policy.’ The Joint Chiefs felt that a direct challenge to Obama’s policy would have ‘had a zero chance of success’. So in the autumn of 2013 they decided to take steps against the extremists without going through political channels, by providing US intelligence to the militaries of other nations, on the understanding that it would be passed on to the Syrian army and used against the common enemy, Jabhat al-Nusra and Islamic State.

Germany, Israel and Russia were in contact with the Syrian army, and able to exercise some influence over Assad’s decisions – it was through them that US intelligence would be shared. Each had its reasons for co-operating with Assad: Germany feared what might happen among its own population of six million Muslims if Islamic State expanded; Israel was concerned with border security; Russia had an alliance of very long standing with Syria, and was worried by the threat to its only naval base on the Mediterranean, at Tartus. ‘We weren’t intent on deviating from Obama’s stated policies,’ the adviser said. ‘But sharing our assessments via the military-to-military relationships with other countries could prove productive. It was clear that Assad needed better tactical intelligence and operational advice. The JCS concluded that if those needs were met, the overall fight against Islamist terrorism would be enhanced. Obama didn’t know, but Obama doesn’t know what the JCS does in every circumstance and that’s true of all presidents.’

The DNC practicing fascism openly, not reported on the mainstream.

This is plain old demoncRAT fascism,  democrats should move over to the other side,  at least we still have some choices and some differing voices.   The establishment left and right are out of control.   Now do we see why Donny and Teddy and Markio and Carly are doing so well???????

Everybody knows it. Hide the Hilldog.

Hide the Hilldog,  if people see and hear what Barrica Hilldog the 2nd.. says it is over for the demoncRATS,  and everyone knows it.  DemoncRAT debates on Saturday night?  Dallas and Jets game Saturday night GMAB.HAHAHAHA.

The activists, the activists, the activists are making a huge strategic error or this is part of a plan.  This strategy plays out poorly if one looks ahead and counts heads.  Don't ever taunt the team that has the open hand showing that it wins under any circumstance. This next election will not be determined by activists and Mexicans,  when they throw down this threat they are guaranteeing a huge turn out by Americans which outnumber the "immigrants" 30 to 1.  Americans are fed up with this leftist invasion crap,  univision, telemundo, unimas etc.. are playing with fire,  the FEC may get read the riot act to investigate these leftist latino political media super pacs very soon.  Vote America vote,  we've got them outnumbered big time.

No worries just plain old BS from the left.  georgie rammos you are a pi$$ ant.

The link below is a less slanted, much less leftist perspective on Ted Cruz surging ahead in the polls.  I have always written it is still early in the game... we are like at the end of the first quarter in a football game.The left hopes that the repubic candidates will beat each other up..................not going to happen, sorry, nope, not going to fall for it.  The libtards are an arrogant bunch of tiny brains that know only one game,  to divide and pit Americans against one another,  they have nothing else.

Ted Cruz will astound with his grace,  intelligence,  confidence,  conviction, sincerity,  and commitment to do what he says he will do.......  You know why???  Because he has walked the walk  and did what he said he was going to do in Washington D.C. more than a few times,  the establishment,  left AND right despise him,  he connects to the proletariat. Ted will bring out at minimum 60 million to vote for him.   I believe he should get Secret Service protection now.

He will not play Trump's game.

Ain't that the truth.

"For such men are false apostles, deceitful workmen, disguising themselves as apostles of Christ. And no wonder, for even Satan disguises himself as an angel of light. So it is no surprise if his servants, also, disguise themselves as servants of righteousness. Their end will correspond to their deeds."

That's not who we are.

From the Free beacon:

This is what leaving Afghanistan got us.

Cowardly jizhadis covering their ugly fuquing faces.   If we know where these camps are why aren't they eradicated immediately yesterday?  I am praying that barri tonight will inform the American people that operations began this morning to wipe this sh1t off the face of the planet.  Doubt it,  but I am a gambler.

Here is the link: