The Iranian regime is saying they are going to send 11,000 tons of "stuff" to the Palestinians.   They plan on breaching the Israeli blockade and provoking a response from the Israeli navy.  I am convinced that  the Iranian navys' hierarchy of rank has the Suicide ranks of "Suicide Bomber Seaman class , up to Suicide Captains."

Tread carefully Israel!  The Iranian regime is just another group of fascists.  Don't let the fascists play you!

What more do you need?  The military is at odds with this administration..........duhhhhhhhhhhhhhhhhhh!  Any of you conspiracy theorists can rest easy,  the US American military will not come after the American people under any admin.  especially under this keystone cop oil spilling military hating Chicago thugocracy!  The cat is out of the bag, you see the administration is blowing protocols out of the water,  therefore no surprise there is so much BS that the BS has to see the light.  There is no hiding the terrible decision processes that are going on in DC anymore.

Sen. John Kyl is another instance of this developing story,  the GANGSTAPUPPETOTUSPOS is being exposed for what he is,  a charlatan.  Who do you think is telling the truth Sen. Kyl or Billy Burton?

The new keeper of the cement pond!

Here is a pic of the new keeper of the cement pond he is kinda cute!  He likes to sit in the sun and take dips all day long whilst feeding on mosquito larvae etc.! What a life.  He must be bringing me good luck cause since he showed up I've had a couple of hits. 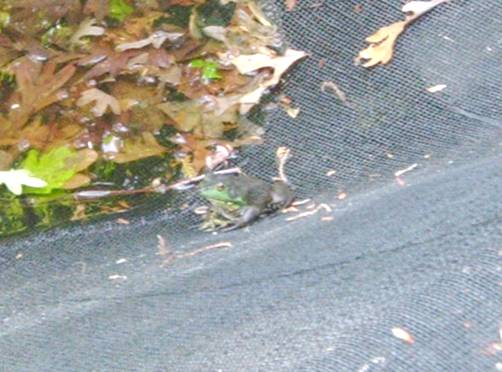 This Mexico country is so hypocritical it goes beyond the pale.  They regularly have beheadings, mutilations, murders, slave trade, crooked police,  and rapes in Mexico all in the name of drugs.   So they are all in a tizzy about some kid being shot at the border crossing,  they were throwing rocks,  firecrackers,  and who knows what really happened.   This has been out of control for years and is coming to a head,  screw the double standard and get tough with these second reconquista morons.

What a classless POS jerk,  no more McCartney.  Senility is setting in early or too much weed,  that was down right ignorant what an a$$4o1E.  You don't do this political stuff at the WH on top of being a GD foreigner,  it is like fitty cent going to GB and calling the queen illiterate,  get it?  the illiterate calling the literate, illiterate

Pelosi and the "word".

This is about the most ditsy airheaded thing I have yet to see and hear from this congress woman speaker of the house for crys sake!  This is embarrassingly unbelievable Konane referenced it but here is the video,  you have to understand she may be on something and she is losing it.  How stupid are the people that vote her in?