Watching the mayor of NY. read Spanish is hilarious! The talking head TV reporter TV states: "As the mayor speaks in Spanish." HAHAHAHAHAHAHAHAHAHA.  The moron TV talking head obviously doesn't know the language!  A parrot could do better than the little mayor,  that thought he could read Spanish. Tragic, in that the latino community has no real representation in NY,  because if he had any "real latino" in his admin.  they could have spoken for, or coached, the Bloomberg mayor of NY to speak with a little better pronunciation and accent.

It is like when Gerry Rivers (Geraldo Rivera) destroys Spanish when he speaks, I cringe,  and think WOW he actually believes he is speaking Spanish.

To Spanish people listening to faux Spanish as Bloomberg and Gerry attempt is like fingernails across a chalkboard or a very poorly tuned musical instrument.

To the mayor: "Stick to English, you ain't getting latin votes with that mess."

As a side note GW's pronunciation of Spanish is much better (not great) than the two jokers above.  I was dissappointed that GW didn't use his Spanish skills more often.

I was born in one country, raised in another.

My father was born in another country.

I was not his only child.

I became very close to my mother, as my father showed no

My mother died at an early age from cancer.

Later in life, questions arose over my real name.

My birth records were sketchy and no one was able to

I grew up practicing one faith but converted to

Christianity, as it was  widely accepted in my country, but I practiced

non-traditional beliefs &  didn't follow Christianity, except in the public eye

I worked and lived among lower-class people as a young

adult, disguising  myself as someone who really cared about them.

my life and I  embarked on a new career.

I wrote a book about my struggles growing up.

difficulties accepting  that my father abandoned me as a child.

I became active in local politics in my 30's then with

help behind the  scenes, I literally burst onto the scene as a candidate for

That reinforced my conceit.

I had a virtually non-existent resume, little work history,

and no  experience in leading a single organization.

as though I were  a magnet and they were small roofing tacks.

I drew incredibly large crowds during my public

This bolstered my ego.

At first, my political campaign focused on my country's

seized every  opportunity to bash my country.

But what launched my rise to national prominence were my

views on the  country's economy.

better and every  poor person would be fed & housed for free.

I knew which group was responsible for getting us into this

It was the free market, banks & corporations..

I decided to start making citizens hate them & if they

were envious of  others who did well, the plan was clinched tight.

I called mine "A People's Campaign" and that

sounded good to all people.

I was the surprise candidate because I emerged from outside

the traditional  path of politics & was able to gain widespread popular

I knew that, if I merely offered the people 'hope',

together we could  change our country and the world.

So, I started to make my speeches sound like they were on

behalf of the  downtrodden, poor, ignorant to include "persecuted

My true views were not widely known & I needed to keep

them unknown, until  after I became my nation's leader..

I had to carefully guard reality, as anybody could have

easily found out  what I really believed, if they had simply read my writings

and examined  those people I associated with.

Then I became the most powerful man in the world.

And the world learned the truth.

Hint: Those that don't learn from history are doomed to repeat it.

Who didn't see this coming?

Tea party anyone? Dept. of Homeland Security now publishes this pile of $h1T,  and they call terrorists like Al Qaeda,  international contingency plans!  The Obama admin. is so tough on their political opponents because they can't debate or argue on merit,  this current administration IS exactly what the morons on the left believed about the last crew was about.   They were misled into believing this current TOTUSPOS is out to IMPROVE the USA, you've been fooled.  This PUPPETTOTUSPOS is being run by a group of people that don't have the best interest of America in mind.

If Bush had that Captain rescued the way OBAMA did they would be calling for Bush's head.  Obama is no uniter he is a political hack partisan leftist.  He murdered 3 young muslims in cold blood,  that is your Obama spine made of steel,  what a hero!

This young man asks a question, and gets a pile of $h1t from the chief BS packer Bawney Fwanks Massachusetts (D) .   The Harvard student was later interviewed and stated that when he goes to Repubican. etc. townhalls he gets respect and direct answers, but when he goes to the new peoples workers DEMOfascist meetings he gets the beat down just as Bawney delivers in this video.  Notice Bawney teaching that the student NOW (currently) has the right to free speech.  You know like for, now..................................

Shaking in his boots.

The dear leader of N. Korea is laughing at the "New West" and the Chinese are telling our dear TOTUS and his NATO (Near Assinine Tools Organization) buddies not to get so upset.   The Chinese are right, action talks, BS walks.   Talking about how outrageous this defiant launch is, makes no difference to the likes of a dictator like "Kim Jong I so lonely".  If the "New West" meant business they would have taken that piece of junk off the launch pad and see how willing the little punk would be to start a war or maybe place sanctions on the world HA!.  I am waiting for the spine made of steel to show itself........................ 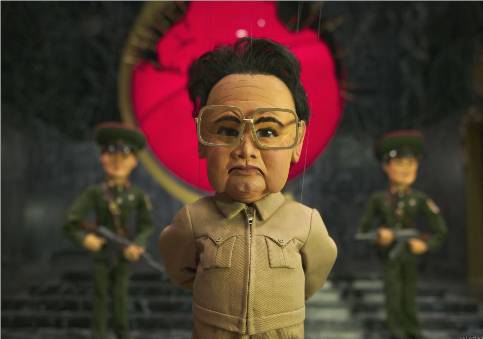 I laugh at you, give me money, not US dollars, I want Euros!