'Give It Back For Jobs' Helps Affluent Return Tax Cuts 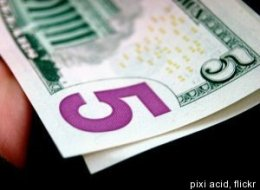 For affluent Americans outraged by the fiscal and social consequences of tax cuts handed to them by President George W. Bush and recently extended for two more years, a trio of similarly dismayed academics has furnished a way for them to put their money where their mouth is.

Their new website, giveitbackforjobs.org, invites high-income Americans to calculate the value of their tax cut under the extension and then pledge to donate that money directly to charities that the site says encourage "fairness, economic growth, and a vibrant middle class." The site doesn't accept contributions directly, but links users to the charities.

The site has been engineered to offer Americans who view the tax cuts as misguided a means to personally direct dollars toward countering the effects, while also registering a protest for broad policies that have exacerbated economic inequality.

"It's like civil disobedience," said Daniel Markovits, a professor at Yale Law School, and one of the three academics behind the initiative. "You're not committing a crime, but the government says, 'This is what you should give,' and you're saying, 'No, I should give more.'"

President Obama took office last year on a pledge to end the tax cuts lavished by his predecessor on the wealthiest American households. But he agreed to continue the cuts via a controversial compromise with Republicans in Congress in which he gained an extension of emergency unemployment benefits, while also securing the renewal of lowered taxes for middle-class households.

The deal landed as a bitter disappointment to liberal economists, who have assailed it for perpetuating the conditions that have led millions of ordinary Americans to take on impossible debts in recent years to finance housing, health care and education while their wages have stagnated. The tax cuts accelerated a long-term flow of increased shares of national wealth to the most affluent households, leaving smaller and smaller slices for everyone else

Give It Back For Jobs aims to narrow the gap by effectively mimicking the tax policy that would have been in place had the Bush tax cuts been allowed to expire. Had the tax cuts gone off the books, more dollars would have flowed into federal coffers, making more money available to pursue job-creating public works projects and aid to now ailing states and local communities. The new website seeks to compensate for those lost tax revenues by inviting wealthy Americans to voluntarily contribute equivalent funds to social service groups that are focused on aiding people contending with the weak economy.

"It's private collective action that builds upon itself and, in effect, amounts to a kind of shadow tax policy," said Robert Hockett, a professor at Cornell Law School, and another force behind the site. "It's a partial representation of what a proper tax policy would be."

The website grows out of a similar effort that Markovits and Hockett unleashed five years ago in the wake of Hurricane Katrina, called givebackthetaxcut.org, which raised around $250,000 in relief aid.

They viewed that disaster, and the dearth of help for people affected, as more than an accident: They saw it as the outgrowth of policies that have favored the wealthy while leaving middle class and poor Americans to fend for themselves.

"When Katrina struck, we were both sort of astonished," said Hockett. "It was a humanly facilitated disaster. It seemed it was no coincidence that the failure coincided with unbelievably gigantic tax cuts."

That site employed a tax calculator, much like the one on giveitbackforjobs.org, and it, too, invited people to donate money what they would have been giving the government absent the Bush tax cuts.

Ironically, that calculator was designed by none other than Peter Orszag, who headed Obama's Office of Management and Budget, and recently took a senior executive position at the Wall Street goliath Citibank. He played no role in developing the new site.

For the new site, Hockett and Markovits joined forces with Jacob Hacker, a Yale political scientist who has written frequently about economic inequality and the strains of the middle class.

"The 2001 tax cuts were a really terrible policy," Hacker said. "They were really skewed towards the rich in the 20 years in which the rich got much richer. To sustain that policy in the face of majority popular support for ending tax cuts for the rich is a pretty egregious example of what I call 'winner-take-all' politics."

The tax cuts will give about $300,000 to taxpayers in the top one-tenth of one percent of the bracket, or those making $2 million in annual income and above. The median tax cut is about $1,000.

Far from a conduit for money to flow to social service groups, Give It Back For Jobs is pitched by its creators as a way to enable political action, while giving contributors the means of proving their convictions and sharing in a collective undertaking.

"People are privately incredibly generous," said Markovits. "There are a quite a few people who would like society as a whole to be juster, to let their private commitments be translated into a langauge that says, 'We are in this together.'"

The professors chose to give the money to charities in part as a rebuke of what they portray as an inadequate federal response to the long-running national economic crisis.

"We're trying to immediately and directly support programs the government ought to be doing," said Markovits.

They have opted to target organizations focused on expanding access to health care and housing, and those that train unemployed workers for new careers.

"We wanted the categories to have an obvious connection with economic downturn," said Hockett.

Some view the site as more symbolic than substantive--a kind of feel-good effort that does not alter the real economic policies that have assailed the middle class and working poor. In this view, such policies can be changed only by the White House and Congress, and that will only happen through advocacy and effective political organization.

"If you want to get anywhere with this agenda, you wont get anywhere by being nice," said said Dean Baker, co-director of the Center for Economic and Policy Research in Washington. "It's like going to a gunfight with an olive branch."

But the professors behind Give It Back For Jobs dismiss such criticisms, while asserting that they have realistic aims.

"We don't think this is suddenly going to raise all the money it would have raised if tax cuts on the wealthy had been allowed to expire," said Markovits.

Rather, he suggested, the new website may alter the national debate, raising awareness of the consequences of extending the tax cuts, and setting up conditions for a different policy trajectory in the years ahead.

"If people took a cold shower for a moment, and got a little bit more reflective, surely they would realize that one of the things that the funding of a government is for is to assist those who are suffering through no fault of their own," said Hockett.

posted by truesee  # 9:32 AM
Comments:
Give the money to Charity? Are they serious? What charity creates jobs (except for themselves, of course).

Give it back for jobs? Are they serious? Why not hire one or two or ten people thus giving those people a salary and thus letting them support themselves. Would that not make for a better solution?

Why would any thinking rich person "give it back" in the manner proposed by these supposedly intelligent people.

And while I am on my soap box, let me address this child obesity thing. If our kids are too fat, then cut out the school lunch program for overweight kids. That should fix the problem. I am with Sarah Palin on this one.


# posted by GASMETERGUY : 11:51 AM
i just don't understand why senior citazens,and federal workers are made to sacrifice,and no one else.the little tax breaks for middle classes are small compaired to how much thewealthy could help,but no,they have to take it from the majority,as there are a lot more.it does however hurt them to a greater degree then it would the wealthiest.hoodwinked,or wool over our eyes?

# posted by scorpio : 12:47 PM
It goes to show how the blind will let the blind lead them to show their hate for kids, I am glad i don't have to live with the likes of Sarah Palin and other racist. Good this country is large enough we don't have cross path.Where is PETA on this Witch , all this killing for sports.She need to start with her fat kids.Enough said!!!

# posted by louise black : 2:52 PM
This has to be the stupidest idea ever.

# posted by Todd : 12:22 AM
Todd , you know first and foremost that I can't be a racist there isn't a model for that statement . On the other hand she can and has been since she been on the scene, that why the right wingers love her so,however let me clarify this statement about the kids.She should start fighting obesity by first teaching her kids how to eat healthy,God knows she can afford it,she has lot of people following her this would be the right thing to do, since we are so overweight in this country,especially the kids.Oh ,yes you are entitle to your opinion . This is not the stupidest idea ever ,I can give you some of those out of people you support mouth,she is one of them.Enough said!