SAN DIEGO — Some people go to court hoping to win millions of dollars. Tyler and Cameron Winklevoss have already won tens of millions. But six years into a legal feud with Facebook, they want to give it back — for a chance to get more.

Tyler Winklevoss, left, and his twin, Cameron. They want to undo a $65 million deal and pursue a case against Facebook.

Mark Zuckerberg, Facebook’s chief executive, has said the Winklevoss brothers’ idea was specifically for a dating site, not a social network. 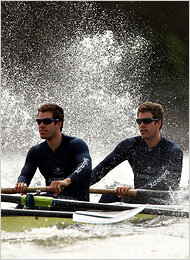 The Winklevosses — identical twins and Harvard graduates — say that they, along with another Harvard student, Divya Narendra, had the original idea for Facebook, and that Mark Zuckerberg stole it. They sued Facebook and Mr. Zuckerberg in 2004, and settled four years later for $20 million in cash and $45 million in Facebook shares.

They have been trying to undo that settlement since, saying they were misled on the value of the deal. But it has not been an easy decision.

As recently as Thursday, the brothers considered dropping their effort to unwind the agreement, and went as far as drafting a statement to that effect, according to people close to the case. They decided, though, to keep fighting.

Their argument is that Facebook deceived them about the value of the shares, leaving them with far less than they had agreed. Whatever their value at the time of the deal, Facebook’s shares have soared since, putting the current worth of the settlement, by some estimates, at more than $140 million.

Next month, the twins and Mr. Narendra plan to ask a federal appeals court in San Francisco to undo the deal so they can pursue their original case against Facebook and Mr. Zuckerberg, and win a richer payday. They could, though, lose it all.

Still, they say it’s not about the money, it’s about the principle — and vindication.

His brother, Cameron, chimed in, “What we agreed to is not what we got.”

Facebook denies it did anything improper and says the Winklevosses simply suffer from a case of “settlers remorse.”

To make matters more complicated, the twins are also at war with the lawyers who helped them win the settlement. The brothers fired them, accused them of malpractice and refused to pay them. A judge recently found for the lawyers, and ordered the twins to pay the 20 percent contingency fee, or $13 million. For now, the money and shares remain in an escrow account.

Yet their battle with Mr. Zuckerberg is what has had them riled up. When they talked about him, and told their version of the founding of Facebook, they helped finish each other’s sentences, easily reciting every last detail of a tale they have evidently told time and again.

“It shouldn’t be that Mark Zuckerberg gets away with behaving that way,” Cameron Winklevoss said.

The company declined to make Mr. Zuckerberg available for an interview, and Andrew Noyes, a spokesman, said Facebook would have no comment “beyond was is already in our appellate briefs.” In the past, Mr. Zuckerberg has denied he stole the Facebook idea from the Winklevosses, saying they planned a dating site, not a social network.

The twins, who are 29, recently told portions of their story in a “60 Minutes” interview for CBS. They grew up in affluence in Greenwich, Conn., were varsity rowers at Harvard and competed in the Summer Olympics in Beijing in 2008. They now live here in San Diego, where they are training for the 2012 London Olympics.

They are as physically striking and imposing as they appeared in the film, “The Social Network, where they were portrayed by one actor, Armie Hammer. They are 6-foot-5 , and their frames are lean and muscular, shaped by years of rowing.

For the interview, they wore hoodies and jeans, and only the variation in the hoodies — one zippered with a Ron Jon Surf Shop emblem, one a pullover with a Quicksilver logo — helped to tell them apart.

As they talked about the Facebook case, no detail was too small to omit, from where they first met Mr. Zuckerberg (the Kirkland House dining room) to the layout of Mr. Zuckerberg’s dorm room, to the content of the e-mails he had sent them after they asked him to do computer programming for a Web site called Harvard Connection. They recited arcane facts about the valuation of private companies and even quoted from the Securities Act of 1934, which they say Facebook violated when it drew up the settlement.

In addition to a bigger payday, the twins say they want a court to reconsider their original claims about Facebook’s founding, pointing to instant messages on the subject sent by Mr. Zuckerberg to various friends. The messages have come to light since the brothers signed the deal. But they say Facebook executives and board members have known about the messages since 2006, and played dirty by concealing them when they negotiated the settlement.

“If you take all those documents, it is a dramatically different picture,” Tyler Winklevoss said.

Facebook declined to comment on the messages. In prior interviews, Mr. Zuckerberg said he had regretted sending some of them.

While the Winklevosses could end up losing their settlement, the risks for Facebook are high as well. If the court unwinds the agreement, the company will have to decide whether to offer them a richer settlement or face a trial. Recent trades on a private exchange suggest that Facebook, which is not a public company, now is worth around $50 billion, and the company may not want the negative publicity associated with a trial, especially if it decides to move forward with a stock offering.

The roots of the original dispute date to 2003, when Mr. Zuckerberg, then a Harvard sophomore, said he would help the Winklevosses and Mr. Narendra program Harvard Connection, later renamed ConnectU. But Mr. Zuckerberg delayed work on Harvard Connection, and when pressed for answers, stalled, according to the Winklevosses. In February 2004 he released TheFacebook, which eventually became Facebook.

After ConnectU and its founders sued, Facebook countersued in 2005.

The settlement, which gave Facebook ownership of ConnectU, was supposed to resolve all claims.

The details of the new dispute, which erupted almost immediately, are less known, in part because the parties reached the settlement after a confidential mediation. But according to court documents, the parties agreed to settle for a sum of $65 million. The Winklevosses then asked whether they could receive part of it in Facebook shares and agreed to a price of $35.90 for each share, based on an investment Microsoft made nearly five months earlier that pegged Facebook’s total value at $15 billion. Under that valuation, they received 1.25 million shares, putting the stock portion of the agreement at $45 million.

Yet days before the settlement, Facebook’s board signed off on an expert’s valuation that put a price of $8.88 on its shares. Facebook did not disclose that valuation, which would have given the shares a worth of $11 million. The ConnectU founders contend that Facebook’s omission was deceptive and amounted to securities fraud.

They refuse to say how much they would ask for in a new negotiation, but they said that based on the lower valuation, they should have received roughly four times the number of shares. At today’s price, that would give the settlement a value of more than $500 million.

In its brief, the company says it was under no obligation to disclose the $8.88 valuation, which was available in public filings. Facebook describes it as one of many that it received and as “immaterial” to the calculations of ConnectU founders and their battery of lawyers and advisers.

“There was no chance that that one valuation would have affected the decision of these sophisticated investors and their entourage of advisers,” Facebook wrote in its brief.

In marketplaces that match buyers and sellers of the shares of privately held companies, Facebook’s shares have soared to more than $100 in recent trades, after adjusting for stock splits.

So far, Facebook’s arguments have won the day in multiple court rulings.

The brothers are hoping for better luck next month, before the United States Court of Appeals for the Ninth Circuit. Unless they decide to give up.

Last year, the Winklevoss brothers completed coursework for a masters in business administration at Oxford. Cameron helped to start Guestofaguest.com, a Web site that offers information about “people, places and parties” in New York, Los Angeles and the Hamptons.

“We are moving forward and trying to be productive individuals,” Cameron said.

When asked if they could have turned ConnectU into a site with hundreds of millions of users, like Mr. Zuckerberg did with Facebook, the twins replied in unison, “Absolutely.” They added that Mr. Zuckerberg deserved some credit for “not screwing up” and expanding Facebook into a community of 500 million users. But they believe the fame and fortune is undeserved.

Tyler Winklevoss said: “Mark is where he is because we approached him to include him in our idea.”