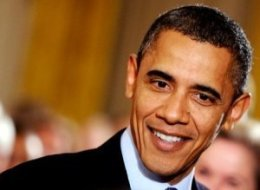 WASHINGTON — President Barack Obama celebrated a bipartisan "season of progress" on Wednesday at a year-end news conference marking an up-and-down second year in office that blended a thrashing at the polls, slow progress on the economy and late victories in Congress.

He forecast struggles over spending in 2011 with Republicans who take control the House, and vowed to try again and pass sweeping immigration legislation that was blocked by GOP critics. "If I believe in something strongly I stay on it," he said.

Obama opened the news conference with a reference to the nuclear arms control treaty with Russia that the Senate ratified earlier in the day on a bipartisan vote. In addition to cutting nuclear weapons and launchers, he said the pact will allow U.S. inspectors to "be back on the ground" in Russia.

"So we'll be able to trust but verify," he added, quoting the late President Ronald Reagan in another in a string of bipartisan gestures of recent weeks.

The president, who signed legislation earlier in the day permitting gay members of the armed forces to serve openly, said he does not currently favor legalizing gay marriage.

"I struggle with this. I have friends, people who work for me who are in powerful, long standing gay or lesbian unions," he said. "I have said that at this point my baseline is a strong civil union that provides them protection and legal rights."

The economy was not nearly as dominant a subject as it has been at other news conference in Obama's tenure. He said the nation is past the "crisis point," and he intends to focus in 2011 on reducing unemployment and making the country more competitive in the international marketplace. Unemployment was measured at 9.8 percent in November, down only slightly from its double-digit high in 2009. Economic growth has been stronger in recent months than earlier in his term, but not yet powerful enough to guarantee a quick recovery.

Obama said deficit reduction would be a major issue in 2011.

"I guarantee you, as soon as the new Congress is sworn in, we're going to have to have a conversation about, how do we start balancing our budget or at least getting to a point that's sustainable when it comes to our deficit and our debt?" he said.

"And that's going to require us cutting programs that don't work, but it also requires us to be honest about paying for the things that we think are important."

The president said that after midterm elections on Nov. 2, many "predicted Washington would be headed for more partisanship and more gridlock. Instead, this has been a season of progress for the American people."

He added that the accomplishments of a postelection session of Congress demonstrate "we are not doomed to endless gridlock."

Obama spoke a few hours after the Senate ratified the treaty he negotiated with Russian President Dmitry Medvedev to reduce both nation's nuclear arsenals, the final major action of a productive postelection Congress.

In the six weeks since midterm elections he bluntly called a shellacking for his party, Obama has signed bipartisan legislation to prevent a spike in income taxes, cut Social Security taxes for one year and extend long-term jobless benefits through the end of 2011.

Obama will soon sign a measure strengthening the safety of the nation's food supply. He also wrapped up a trade deal with South Korea.

The Senate's ratification of the arms control treaty was Obama's top foreign policy priority of the postelection session of Congress, and a victory the administration ground out over the past few weeks by securing the votes of Republicans. The top two GOP senators voted against the pact, although it was not clear how hard they worked to prevent its ratification.

Obama was flying to Hawaii later in the day, joining his wife and the couple's two children for a year-end holiday.

When he returns, it will be a few days before a new Congress convenes, with a House controlled by Republicans and a Senate with a shrunken Democratic majority.

Despite Obama's upbeat reviews, he conceded disappointment with Congress' failure to enact some of his other priorities.

He said his biggest disappointment was failure of Congress to pass legislation giving young illegal immigrants a chance at citizenship if they go to college or serve in the military. The bill was blocked by Senate Republicans. "I am determined to get immigration reform done," he added.

He also said he was disappointed Congress wasn't able to approve a budget, saying he expects "robust debate" on federal spending when Congress returns.

House Republicans have vowed to roll back spending on hundreds of federal programs to 2008 levels, a proposal certain to spark opposition among Democrats in Congress.

The president said political leaders of both parties must re-examine long-held beliefs to help the economy recover.

But he made it clear that he intends to contest Republicans when the tax bill he just signed comes up for renewal in two years. It extends tax cuts at upper incomes, and the president said he continues to believe "we can't afford a series of tax breaks for people who are doing very well and don't need it."