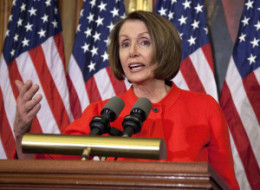 WASHINGTON -- A coalition of Republicans and conservative Democrats combined to push the Obama-GOP tax-cut deal through the House by a vote of 277-148 in Friday's early morning hours. The bill slashes the estate tax, extends all the Bush tax cuts and reauthorizes unemployment insurance for 13 months. The bill will now go to the president for his signature.

The crucial vote was not on final passage of the tax cuts, but on the vote before, to reduce the generosity of the estate tax cut. Had it been included in the final measure, the bill would have gone back to the Senate. An identical version of that amendment passed in December 2009 with 225 votes, but it failed this time 233-194, with 60 Democrats voting against tightening the estate tax.

President Obama whipped support for the tax-cut deal in the final days leading up to the vote. One member told HuffPost that Obama, a Hawaii native, personally called Hawaii Democrat Mazie Hirono to urge her to support the deal. (She voted against the tax-cut deal and for increasing estate taxes on wealthy heirs, despite the pressure.)

The bill was a major priority for Obama, who ironed out the deal with congressional Republicans earlier this month. It passed easily through the Senate on Wednesday in a rare bipartisan vote, with 81 senators voting for the bill and 19 voting against it.

The bill reauthorizes extended unemployment benefits through 2011, meaning more than a million people whose benefits lapsed this month will receive retroactive lump-sum payments within a few weeks.

Rep. Earl Pomeroy (D-N.D.), a Blue Dog, sponsored the amendment that would have altered the estate tax deal and, say Republicans, blown up the bargain. His fellow Blue Dogs rebuffed his attempts throughout the past few days to lobby them to his side.

Rep. Heath Shuler (D-N.C.) played a leading role in organizing Blue Dogs to hold together to beat back the estate-tax amendment and preserve the deal. "We realized pretty quickly that the House hands were completely tied. The deal was struck with the Senate and the Senate wouldn't accept anything going forward," he told HuffPost. "Listening to Vice President Biden, we realized pretty quickly there wasn't no give or take."

In the House, rank-and-file Democrats bemoaned tax cuts for the rich in the deal, arguing they would threaten the future of Social Security and other social programs. Most of the 148 dissenters were Democrats.

As the Democratic leadership struggled to find a way to move the bill through the House, they settled on a procedure that allowed one amendment, introduced by Pomeroy, which would set the estate tax at 45 percent for inheritances of $3.5 million or higher.

The amendment was chosen over several other ideas to change the tax deal, including a resolution by Rep. David Wu (D-Ore.) to extend unemployment benefits to two years -- the same length tax cuts for the wealthy were extended in the tax deal.

Choosing the estate-tax provision doomed the package to passage.

"Unfortunately, Democratic votes, of all the good liberal issues, that's the one where people are weakest," Rep. Barney Frank (D-Mass.) told HuffPost about the estate tax amendment. Frank said that a few other members opposed the estate tax amendment not on its own merits but because they didn't want to disturb the deal. "We lost a few people who were afraid of the consequences of the thing failing. There is this risk aversiveness on the part of some members," he said.

Earlier in the evening, Senate Majority Leader Harry Reid (D-Nev.) made a concession to Republicans when he gave up on an omnibus spending bill that would have funded Democratic spending priorities for the next year. Instead, Reid announced the Senate will pass a continuing resolution to fund the government for 45 days, meaning Republicans will have further opportunities to push for cuts in the near future.

Debate over extending the tax cuts will now take place in 2012, when Obama, all House members and some senators are up for reelection.

HuffPost asked Wu -- who pushed for the unemployment extension to last as long as the tax cuts extension -- for his final thought on the bill as he went down a flight of stairs just off the House floor. He paused for several moments before delivering his answer: "Screwed again."