Days of Auld Lang What?

Days of Auld Lang What?

The origin of the New Year's anthem—and what it means to us.

It is a poem in Scots dialect, set to a Scots folk tune, and an unscientific survey says that a lot of us don't think much about the words, or even know them. The great film director Mike Nichols came to America from Germany as a child, when his family fled Hitler.  He had to learn a lot of English quickly and never got around to "Auld Lang Syne": "I was too busy with words like 'emergency exit' on the school bus," he told me. "As a result, I find myself weeping at gibberish on New Year's Eve.  I enjoy that."

The screen and television writer Aaron Sorkin, who this year, with "The Social Network," gives Paddy Chayefsky a run for his money, says that every year he means to learn the words. "Then someone tells me that's not a good enough New Year's resolution and I really need to quit smoking."

"Auld Lang Syne"—the phrase can be translated as "long, long ago," or "old long since," but I like "old times past"—is a song that asks a question, a tender little question that has to do with the nature of being alive, of being a person on a journey in the world. It not only asks, it gives an answer. 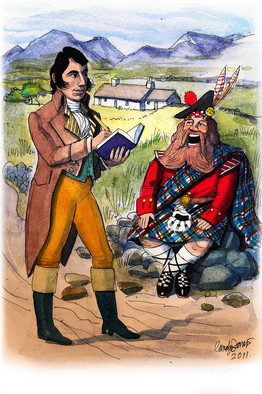 It was written, or written down, by Robert Burns, lyric poet and Bard of Scotland. In 1788 he sent a copy of the poem to the Scots Musical Museum, with the words: "The following song, an old song, of the olden times, has never been in print." Burns was interested in the culture of Scotland, and collected old folk tales and poems. He said he got this one "from an old man"—no one knows who—and wrote it down. Being a writer, Burns revised and compressed. He found the phrase auld lang syne "exceedingly expressive" and thought whoever first wrote the poem "heaven inspired." The song spread throughout Scotland, where it was sung to mark the end of the old year, and soon to the English-speaking world, where it's sung to mark the new.

The question it asks is clear: Should those we knew and loved be forgotten and never thought of? Should old times past be forgotten? No, says the song, they shouldn't be. We'll remember those times and those people, we'll toast them now and always, we'll keep them close. "We'll take a cup of kindness yet."

"The phrase old acquaintance is important," says my friend John Whitehead, fabled figure of the old Goldman Sachs, the Reagan State Department, and D-Day. "It's not only your close friends and people you love, it's people you knew even casually, and you think of them and it brings tears to my eyes." For him, acquaintance includes, "your heroes, my heroes—the Winston Churchills of life, the ones you admire. They're old acquaintances too."

But "the interesting, more serious message in the song is that the past is important, we mustn't forget it, the old has something for us."

So does the present, as the last stanza makes clear. The song is not only about those who were in your life, but those who are in your life. "And there's a hand, my trusty friend, and give a hand of thine, We'll take a right good-will draught for auld lang syne."

To Tom Coburn, a U.S. senator from Oklahoma, the song is about friendship: "I think it's a description of the things we lose in our hurry to do things. We forget to be a friend. We have to take the time to make friends and be friends, to sit and tell stories and listen to those of others."

Gov. Mitch Daniels of Indiana said he always experienced the song as celebratory and joyful until something happened in 2004. Mr. Daniels was running for office, and it became a new bonding experience for him and his father, who followed the campaign closely: "He loved my stories from the road." The elder Daniels died unexpectedly in August, "50 days short of my election as governor." At a New Year's party, the governor-elect heard the song in a new way. Ever since, "I hear its wistfulness."

Lesley Stahl of "60 Minutes," enjoying one of the great careers in the history of broadcast news, thinks of childhood when she thinks of "Auld Lang Syne": "I see New Year's Eve parties going way back, all the way back to when we were little kids and you had to kiss someone at midnight and you had to sing that song." She interviewed Mark Zuckerberg recently. "Maybe in the age of Facebook you don't lose old friends," she says. "Maybe it's obsolete." Maybe "they'll have to change the song."

For the journalist and author Marie Brenner, the song didn't come alive until she moved from her native Texas to New York City, in the 1970s. That first New Year's in town, "Auld Lang Syne was a revelation to me. . . . I thought, this is beautiful and maybe written by a Broadway composer, by Rodgers and Hammerstein." She saw people singing it "on the street, and at a party in a bar downtown." There was "this gorgeous moment when everyone seemed to know the words, and people looked teary and, yes, drunk." They played the song back in San Antonio, "but it took me coming to New York to really hear it."

The song is a staple in movies, but when I asked people to think of the greatest "Auld Lang Syne scene," every one of them had the same answer. Not "When Harry Met Sally," not "Out of Africa," not, for film buffs, Charlie Chaplin's "The Gold Rush." The great "Auld Lang Syne" scene in cinematic history is from "It's a Wonderful Life," which Mr. Sorkin puckishly describes as "Frank Capra's classic tale of an angel who takes up the cause of a progressive in order to defeat a heartless conservative. It's possible I'm misinterpreting the movie, but the song still works."

The scene comes at the end of the film. Friends surround George Bailey, recently rescued by an angel. Someone bumps against the Christmas tree and a bell ornament makes a sound. George's daughter says, "Every time a bell rings an angel gets his wings," and George looks up and winks. "Thanks, Clarence," he says, as the music swells. God bless the baby boomers who discovered that film on TV after their elders dismissed it as Capra-corn.

Tonight I'll be at Suzie and Joe's, with whom I worked at CBS News in auld lang syne. I'll think of some who won't be entering the new year with us—big, sweet-hearted dynamo Richard Holbrooke, and Ted Sorensen, counselor to presidents, whose pen was a terrible swift sword. I'll take a cup of kindness yet for them, for all the old acquaintances in this piece, and for the readers, for 10 years now, of this column. We mark an anniversary. Thank you for being in my life. Happy New Year.