Obama's 3-day trip has 40 aircraft to be biggest ever 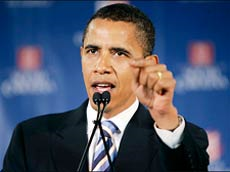 US President Barack Obama's trip to India next month is set to be the biggest ever by any US president in terms of the protocol and logistics.

Headlines Today has accessed the details of elaborate arrangements that will be in place to guard Obama during his three-day trip beginning on November 6. He will be accompanied by US First Lady Micehlle Obama.

The Cadillac limousine is equipped with a mini communication centre to enable Obama to be in touch with the White House, US vice president and the US strategic command. It also has the US nuke launch codes and the nuclear switch for the president. It can also withstand a chemical or germ warfare or even a bomb attack.

The secret service will set up two command posts in Delhi and Mumbai which will act as the communication nerve centres. These centres will keep an eye on each movement by the president with real time satellite monitoring.

Three Marine One choppers will be reassembled in India to ferry Obama and his family. These helicopters will also assist in evacuation in case of an emergency.

Moreover, 30 sniffer dogs will be put on service to boost the security arrangements during Obama's visit.

# posted by sully16 : 2:49 PM
This is what young people dream of. To grow up and be President.
"This is the best job in the world" Pres Obama

# posted by JAP69 : 7:57 PM
So glad to know that we're all paying so much money so the prez can go off and waste it on some glam trip overseas. Doesn't this guy have even an OUNCE of common sense? Where are his fellow Democrats saying "Why not take all the money for that trip and feed homeless people?" I wonder why these people have to be so intellectually dishonest that they can't speak up when crap like this happens.