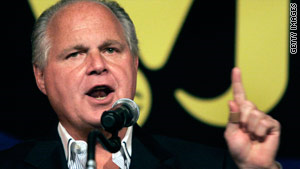 "Rush was admitted to and is resting comfortably in a Honolulu hospital today after suffering chest pains," Kit Carson, the chief of staff for the Rush Limbaugh Show, said.

A source at the Queen's Medical Center told CNN that Limbaugh was admitted late afternoon in "serious condition" and is expected to stay overnight.

The hospital itself would not confirm or deny that Limbaugh was taken there.

Bryan Cheplic, spokesman for the Honolulu Emergency Services Department, would only say that a man was taken from the Kahala Hotel and Resort at 2:41 p.m.

"Whether it was Rush Limbaugh, we cannot say," he said.

Limbaugh was staying at the resort at the time.

Limbaugh's attorney, Roy Black, told CNN he had heard about the hospital trip from media reports. "We are worried about it," he said.

Limbaugh's radio show is broadcast on more than 600 stations and is heard by more than 13.5 million listeners each week.

Last year, he struck a deal with Clear Channel Communications to extend his contract through 2016. The deal is worth more than $400 million.

posted by truesee  # 6:50 AM
Comments:
As usual the comments on the conservative blog sites are ones of encouragement, sympathy, with wishes of getting well soon. And those on liberal blog sites are full of hate, ill-wishes, and hoped-for death.

And, as usual, only the conservatives are labeled as hateful.

Get well, soon, Rush. The world needs your insight.