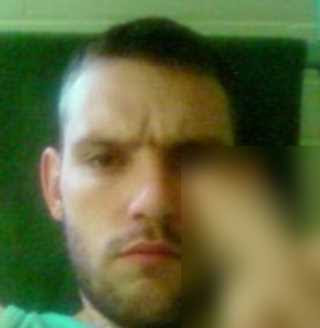 Craig "Lazie" Lynch, 28, escaped from the minimum-security Hollesley Bay Prison near the village of Woodbridge in southern England three months ago. Since then, he's been mocking police via Facebook, and he's also managed to gain a huge number of Facebook "fans." His Facebook photo isn't exactly family-friendly, so I had to modify it some, by the way.

In fact, Lynch has 27,000 fans at the time of this writing. Strangely, a number of posts from his fans seem positive, although a few chime in every now and then to remind people they are "cheering for" a felon. Lynch had been serving a seven-year sentence for committing a burglary with a weapon.

Meanwhile, police have appealed to his Facebook fans to help track him down. How well that's going to work is unclear. Reportedly, when the authorities first made their entreaties to his fans, he only had about 3,800. Now he has the aforementioned over 27,000. In fact, according to his Facebook page, the company deleted his first page, when it had 4,000 fans. Now he has a new one and 27,000 fans.

Strange how the U.K. authorities can't close in on him via his IP address. With Facebook's help, they should be able to catch him. His latest post is further taunting, noting he was on the news being interviewed, via the phone.

i'm messaging you all to tell you to check out channel 5 news uk at 19.30 uk time i just gave them an exclusive phone interview so all you supporters and HATERS out there tune in thank you all love your favourite facebook fugitive Lazie