Serena Williams: 'I didn't do that drugs thing because of Venus'

Serena Williams: 'I didn't do that drugs thing because of Venus'

As she publishes her autobiography, Serena Williams – the No 1 woman tennis player in the world – on her relationship with her sister, and how she is no stranger to heartbreak or controversy. 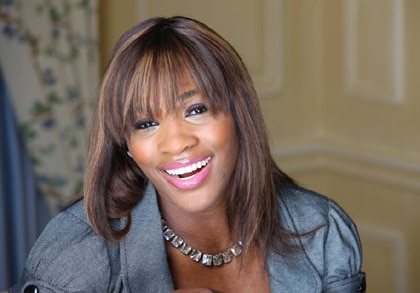 Maybe I’ve blundered into the wrong suite at the Dorchester Hotel, one where there’s a fashion shoot underway. Hair and make-up people are darting about making imperceptible adjustments to a vision of pure glamour. The contents of a couple of large suitcases are spilling over into the lobby, and roses in cellophane are everywhere.

The focus of everyone’s attention is a black supermodel at the far end of the room, Amazonian curves straining the seams of a little grey two-piece. When she smiles for the photographer, the effect is like an extra lightbulb going on. Make that two.

It is the Serena Williams smile, big, wide, exotic. When she comes down from her five-inch heels she is still high as rainforest tree. I wince in anticipation of being crushed as she holds out the hand that can deliver a 130-mph serve and has made her – for the fifth time in her career – the No 1 woman tennis player in the world. But she is all feminine decorum. The voice that bawled out a lineswoman during the US Open in September is no more than a purr, lost in the soft furnishings.

These are awkward times for Serena and for tennis. She’s facing a fine and possible ban from the Australian Open in January because of her tirade against the line-judge during her semi-final defeat to Kim Clijsters. Incensed by a bad call, she threatened to “shove this ball down your ------- throat” , with some finger-jabbing to reinforce the point. “I was 100 per cent, unequivocally wrong,” she drawls softly. “It was absolutely not professional. I didn’t react correctly. Spiritually. I let myself down and I have apologised to her. I’m not perfect. I’ll make another mistake – as you will – but making the same mistake isn’t cool. I’ve learnt a lot from that experience.”

She pleads the “200 per cent passion” she puts into the game, and says she was spooked by a bad call made against her two years ago at the same event. “I thought: is this coincidence? What is going on? Is it for real? I don’t give foot faults.” Her view is that a career shouldn’t be defined by one unguarded moment. Not hers, not Andre Agassi’s.

Agassi’s autobiographical confession that he took crystal meth and then lied to the tennis authorities when he tested positive for the drug is still rocking her profession. “It’s weird. I don’t understand it,” she says. “When I heard I didn’t know what to think and I still don’t. But I don’t believe it should define his career. A career is a whole timepiece, a whole period.”

Her bemusement and unreadiness to condemn a fellow professional seem perfectly genuine. “That whole drugs thing freaks me out,” she says, squirming. “I don’t even know what crystal meth is. I’ve never seen it on the LA scene. Tennis is, for me, a pure sport. I get tested randomly all the time.”

But Serena is the risk-taker, the more experimental of the fabled Williams sisters. She credits her older sister with keeping her on track.

“I didn’t do that drugs and wild life thing because of Venus. She led by example. When I was younger, she was my protector, my bodyguard, my everything. She always looks out for me. She is such a good person. I couldn’t have asked for a better older sister.”

Her classy win against Venus in the year-end championships at Doha recently raises again their mysterious, inter-connected supremacy. Do they really fight to the death? How is it they never get bored with playing one another? What is it that preserves their uncanny interdependence and separateness from the rest of the tennis world? Serena says when she faces her sister in a tournament – she won her 11th Grand Slam singles title against Venus at Wimbledon this year – she puts aside sisterly feelings.

“I have to be selfish. When I play her now I just look at the ball. I try to focus on winning. And when it’s over, it’s over. She doesn’t like to lose. I don’t gloat. I’m happy to win but a tiny bit of me feels sorry because I also want her to win. I have to ask: will it matter who wins this in 10 years’ time?”

She and Venus share a house in Florida but Serena, who flirts with the idea of being an actress, also has a flat in LA. The sisters are worth millions. In five days in Doha, Serena added another £950,000 to her bank balance. She claims that, apart from her fashion indulgences (she is starting her own label), she is frugal to the point of paranoia. “I hear my Dad saying: 'Don’t make money like other athletes and then go broke’.”

Both Agassi and the Williams sisters were shaped by controlling fathers. Agassi’s admission that he hated tennis “with a dark and secret passion” strikes her as unsurprising. “It would be lying to say I loved tennis every second of my life. There are moments when you say: 'I hate this. I don’t want to be here.’ But deep down, I absolutely can’t be anywhere else. I’ve never felt that intense hate he’s felt for the game and I give him kudos for sticking through it.”

In the “gloomy funk” that engulfed her after the violent death of her sister Yetunde, Serena admits growing to resent tennis and a lifetime of pleasing other people. “It’s like tennis had become a job for me instead of a passion, a joy, a sweet release,” she writes in her autobiography, Queen of the Court. She tried to play her way out of grief but it didn’t work. For months she didn’t leave her apartment in Los Angeles except to go to therapy. Even her father, whom she adores and calls “a genius” for what he did to raise two international tennis stars, was shut out. “For the first time, tennis couldn’t solve anything for me. My whole life had been tennis, tennis, tennis and here I desperately wanted something more.”

Yetunde was shot in a car with her boyfriend in Compton, California, the tough neighbourhood where the five sisters grew up. The bullet was apparently meant for him. Serena lost a mother-figure and best friend. “No words of comfort, no pieces of scripture, no amount of faith can swallow up the hurt of something like this or help you absorb the news. It was really hard to tell my mom and my sister. I was adrift for a while. We all were. It’s something you never get over. None of us could talk without crying. We still cry.”

The family are staunch Jehovah’s Witnesses, so by religion as well as colour they are conspicuously apart from most of the tennis circuit. Although the sisters have become icons of African-American achievement, the number of black faces in the stands are still depressingly few. “We’re trying to open doors,” Serena says. “But it’s gradual.”

Serena’s usual method of deflecting questions about her personal life is to say she’s dating her racquet.

This time, tugging at strands of freshly straightened hair, she admits her boyfriend is the rapper and actor Common (who sent the roses) but not with any enthusiasm. “He does his thing; I do mine. Maybe we’ll meet somewhere in between.”

She says she doesn’t want to be one of those “me, me, me” athletes whose career is everything. “It’s important to have a good balance.” Plan A, she says, was to have children before the age of 30, but as she’s 28 already “I need to come up with a Plan B.”

Life after tennis is a big fixation. “I can’t play tennis for ever. It will be someone else’s turn. Someone bigger and better. When that happens, I don’t want to sit at home one day and look at Venus across the couch and be, like, what next? So I have a back-up plan.”

Her many interests – fashion designing, jewellery, acting, scriptwriting – make her an easy target whenever she’s off form. Tennis Times sneered earlier this year: “Serena Williams seems to think she can take over the world one little bit at a time.”

Does she care? The answer is on the cover of a “naked athletes” issue of ESPN magazine, where she is enjoying being nude. “As you all know,” she blogs, “I am not a size zero but I love my body. This opportunity allowed me to showcase my body as a form of art. I was so flattered. To choose me, AHHHH!!!”

So Serena is a supermodel after all, aspiring to the sexy, old-Hollywood image reminiscent of Dorothy Dandridge, Lauren Bacall or Marilyn Monroe. The risks? She just laughs and says if you look really, really closely, you can see her underwear.

Only three or four years ago, Serena Williams was being likened to a dying supernova. “People had written me off,” she says. “Serena Williams was done. I was 24 years old! When people tell me what I can’t do, I do better. What makes a real champion is someone that can fall and dust themselves off and get up.”

Her one remaining goal is to beat Billie Jean King’s record of 12 Grand Slam singles titles. “That would be amazing. But I’ve done great, regardless.”