Girl, 11, gives birth after going into labor at her WEDDING

11-year-old gives birth to baby girl after going into labor at her WEDDING!

An 11-year-old girl became one of the world's youngest mothers - after she went into labor at her wedding.

Kordeza Zhelyazkova, from Sliven, Bulgaria, was still wearing her wedding dress and tiara when she was rushed to the hospital, where she gave birth to a 5-pound, 8-ounce girl.

"I'm not going to play with toys anymore - I have a new toy now," Kordeza told reporters as she showed off little Violeta.

Kordeza - who got pregnant two weeks after her 11th birthday - told the News of the World: "It feels strange...now I must grow up. I am not going back to school."

The baby's 19-year-old dad, Jeliazko, met Kordeza when he rescued her from bullies in the playground.

"I was walking past the school when I saw some boys mocking her and I told them to leave her alone," he said. "Then she arranged to meet me and asked me out on our first date.

"We didn't plan to have sex or a baby, although I fell in love with Kordeza the moment I saw her," Jeliazko said.

But within a week, Kordeza was pregnant - and Jeliazko was facing six years in jail for having sex with a minor. The age of consent in Bulgaria is 14.

"I didn't want to say in case he wouldn't fancy me," Kordeza confessed.

"I didn't know I was pregnant until my grandmother saw I had put on weight," she added. "I just thought I'd eaten too many burgers."

"It's normal for our girls to have babies young," said Kordeza's grandmother Dida, 55. "It's our tradition. But I didn't want it for my Kordeza - I felt she was too young."

The family planned a three-day Roma wedding so Kordeza and Jeliazko could be married before the baby arrived.

But Kordeza went into labor on the second day. "I had been having pain in the morning and a couple of hours into the wedding, it got worse."

She was rushed to hospital and gave birth 20 minutes later.

"It was quite easy but painful, too," she said. "I was very happy when I saw her. She has a nose like me and hair like Jeliazko."

Violeta's grandmothers will be her guardians, and Kordeza and her daughter will receive about $115 a month in state benefits.

LINK TO VIDEO AND PHOTOS: 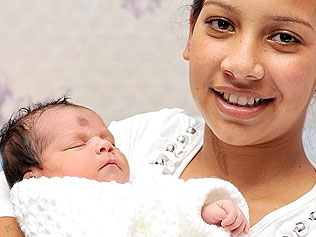