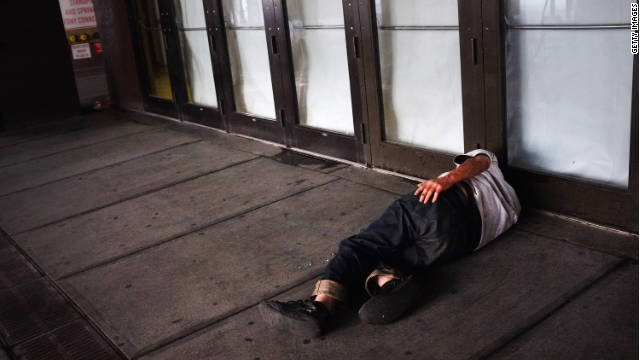 The U.S. poverty rate has risen to 15.1%, its highest level in nearly 20 years.
STORY HIGHLIGHTS

Editor's note: Roland S. Martin is a syndicated columnist and author of "The First: President Barack Obama's Road to the White House." He is a commentator for TV One cable network and host/managing editor of its Sunday morning news show, "Washington Watch With Roland Martin."

(CNN) -- When the U.S. Census Bureau reported last week that a record number of people were living in poverty, Republicans were quick to attach the figures to President Barack Obama, desperately trying to lay them at his feet.

But anyone with common sense knows that someone doesn't just fall into poverty overnight. The deplorable economic conditions that led to today's poverty numbers began in 2007. Republicans often ignore such facts.

Yet when you start digging deeper into the Census Bureau report, what stands out is that of the 10 poorest states in the country, most are the reddest in the nation -- solidly GOP states.

The most impoverished state is Mississippi, and it's followed by Arkansas, Tennessee, West Virginia, Louisiana, Montana, South Carolina, Kentucky, Alabama and North Carolina.

Obama won North Carolina by 14,000 votes in 2008, and although West Virginia is considered a Democratic state, in presidential elections it usually goes for the Republican candidate. There is no doubt that in 2012, the GOP expects to lock up all 10 states in the presidential campaign.

Thus it would make sense that the GOP candidates would at least spend some time in the presidential debates debating the issue of poverty in these red states, and explaining what they plan to do about it.

At the June 13 CNN debate at St. Anselm College in Manchester, New Hampshire, the word "poor" was never uttered, and the only time poverty came up was when former Sen. Rick Santorum discussed his work for welfare reform.

At the September 17 debate at the Reagan Library in Simi Valley, California, Rep. Ron Paul brought up the poor, and that was in the discussion about getting rid of the minimum wage (he thinks it will lead to more jobs) and how he opposes welfare.

During the CNN/Tea Party debate, former Massachusetts Gov. Mitt Romney managed to speak the word "poor," but that was only when it came to America being an "energy-poor" country.

Voters in these traditional red states should be demanding that the GOP candidates banking on their votes say and do more than they are doing. Scarcely mentioning the poor or poverty is insufficient.

Maybe part of the problem is the poor don't have lobbyists. There aren't any Super Pacs being formed to raise millions of dollars to demand accountability on the issue. Even right-wing Christian leaders such as Ralph Reed and his Faith and Freedom Coalition are quick to condemn Obama's plan to tax the rich but say nothing about the poorest states in the country, or even demand a poverty plan from the GOP candidates.

If I were a poor person in a red state, my primary issue would be which candidate, including Obama, speaks to my needs. If a candidate spends more time defending tax cuts for the wealthy and saying nothing about the poor, including the growing number of children on the poverty rolls, that candidate would be hard pressed to get my vote.

posted by truesee  # 7:28 AM
Comments:
This current government wants poverty, plan and simple.

# posted by sully16 : 8:41 AM
addressing the issue of Poverty will never be solved. It is all a matter of how poverty is defined.

This short article puts it all in a nutshell.

http://www.nationalreview.com/articles/229274/obamas-new-poverty-measurement/robert-rector#
an excerpt
Under the new measure, a family will be judged “poor” if its income falls below a certain specified income threshold

I know of one who claims to be poor but upon closer inspection, I discovered he was just as well off as myself. He still complains about being "poor".

So I guess poor depends entirely on how the word is defined.