Pigs are vanishing from pig country

Midwest Farmers Are on Alert Against Pig Thieves 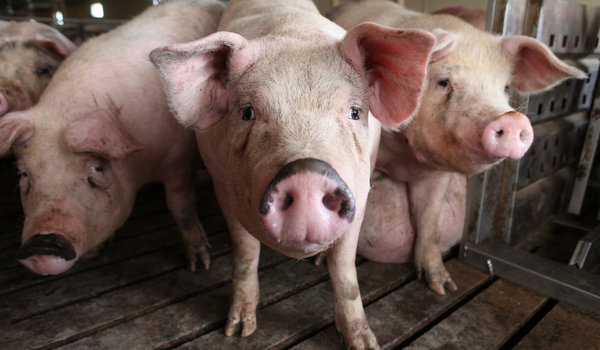 A rash of pig thefts in Iowa and Minnesota has puzzled farmers and law enforcement officials.

LAFAYETTE, Minn. — Here in pig country, the pigs are vanishing.

Ryan Bode, whose family has raised pigs for decades, said thieves broke into this barn in Lafayette, Minn., by cutting straight down some ventilation netting. 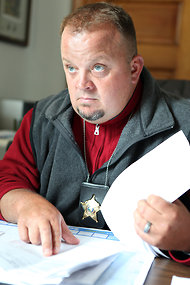 This month, 150 pigs — each one weighing more than an average grown man — disappeared from a farm building in Lafayette despite deadbolts on its doors. Farther north near Lake Lillian, 594 snorting, squealing hogs disappeared last month, whisked away in the dark.

And in Iowa, with added cover from the vast stretches of tall cornfields, pigs have been snatched, 20 or 30 at a time, from as many as eight facilities in the last few weeks, said the sheriff of Mitchell County, adding that among other challenges, the missing are difficult to single out.

“They all look alike,” said Curt Younker, the sheriff, who said he had only rarely heard of pig thefts in his decades on the job. “Suddenly we’re plagued with them.”

Some livestock economists pointed to the thefts in this hog-rich region as one more sign of the grim economy, a reflection of record-high prices for hogs this year and the ease of stealing pigs from the large barns that are often far from the farmer’s house.

“This is the hot commodity of the moment, like copper a few years ago and gold,” said Ryan Bode, whose family company, Rebco Pork, discovered that 150 of its pigs were missing on Sept. 16, shortly before they were to be taken to market.

The loss was $30,000, he said, on top of the “ungodly high” price of corn that he had paid to feed those pigs for six months until they were fat enough to be sold. “And after all that, they’re not here,” he said.

The Nicollet County sheriff’s investigator was swapping details with law enforcement authorities in other places where pigs have been taken and calling for tips of any sort, but Mr. Bode seemed doubtful about seeing his pigs again.

“My guess is that they’re bacon and pork chops already,” he said.

For the moment, as worried hog producers around the region pledged to strengthen their security systems and considered offering rewards to solve the string of cases, investigators in Iowa and Minnesota, which are among the nation’s top hog producers, were left with a tangle of complicated questions.

Was this all the work of a single roving band of pig thieves, or were they isolated incidents with separate culprits, all driven by the high price of pigs (which are going for about $200 apiece right now, and were even higher last month)?

And who would have enough experience with 270-pound pigs (a group that would not, for instance, simply march out of their barns with a whistle and a “come here, boy”) and sufficient equipment (at least a large livestock trailer) to pull off such heists?

And where exactly would they have taken the pigs?

“Hundreds of pigs don’t just disappear,” said Marc Chadderdon, a sheriff’s investigator who has worked in Nicollet County, home to about 33,000 people, since 1994 and said he had never before received a similar crime report.

“It’s not exactly like stealing a pot of gold,” he added. “You have to do something with them.”

Investigators suspect that the pigs may have been taken to meat-processing plants or affiliated “drop-off” facilities or that they were sold at auction barns, which are less common these days as more large pig producers have direct arrangements with food-packing companies.

But that has raised an uncomfortable suggestion in an industry where many of the biggest farmers and pork buyers know one another personally and where a stranger pulling up to sell 100 hogs should give pause.

“Someone in the business somewhere has the answer as to who’s doing this,” Mr. Chadderdon said.

Changes in the way pigs are raised have probably made stealing them easier.

The large, low-slung buildings that often house thousands of pigs, known as “finishing barns,” are often off gravel roads, far from most houses and busy towns, in part to avoid complaints about the smells of pig waste and other environmental concerns.

In some, workers tend to a facility only a few times a day, but mostly leave it operating on its own, with automated feeding and water systems.

As word of the thefts has spread, some farmers in both states said they were keeping closer count of their animals, considering adding more security systems or even tattooing their pigs as a way of identifying them, a practice already used by some farmers (though not in the cases of the missing pigs).

In truth, no one here is precisely sure on what evening (or evenings) the 150 pigs were taken from this facility in Lafayette.

It was not until the pigs here were heavy enough to be sold that Mr. Bode’s family company — which raises 60,000 pigs a year at eight such buildings — noticed that they were missing. The doors were always locked, but, strangely, there had been no sign of a break-in.

Finally, after searching the building from top to bottom, workers spotted a razor-straight opening — just enough for a person to slip through — sliced all the way down heavy bird netting on a side of the building that automatically opens slightly to let air in on hot nights.

“They definitely did their homework,” Mr. Bode said the other day, running his fingers over the gap in the netting. “And they definitely knew what they were doing.”

Mr. Bode, 37, whose family has farmed around here for generations, recalled stories of a missing pig, perhaps even two, years ago.

“In the past, that would have been just for himself, maybe, a way to fill the freezer,” Mr. Bode said. “But now, it’s different. This isn’t about putting food on the table.”

This article has been revised to reflect the following correction:

An earlier version of this article incorrectly quoted Ryan Bode of Rebco Pork. Commenting on 150 missing pigs, he said, "My guess is that they're bacon and pork chops already,” not “baking in pork chops.”