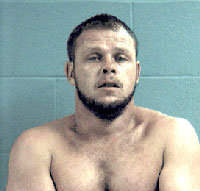 On Saturday morning shortly after 6:30 A.M., Louisiana State Police say they received a call from a concerned motorist saying that a pick-up truck was driving erratically, and that a child appeared to be the driver.

When troopers immediately responded to the area, they say the driver was an eight-year-old boy, and his four-year-old sister was in the back seat.

Troopers say the father of the two kids, 28-year-old Billy Joe Madden, was sleeping in the passenger seat and was intoxicated.

Troopers say Madden admitted that his son was driving them from Mississippi to Texas.

Authorities say both children, who were not injured, were turned over to Child Protective Services and are awaiting the arrival of a family member.

Madden was arrested and booked into the Livingston Parish Jail ontwo counts of Child Desertion, Parent Allowing a Minor to Drive, Open Container, two counts of No Child Restraint and No Seatbelt.

posted by truesee  # 10:04 PM
Comments:
Utt oh.. We learned how 2 drive before our time, but 8 is a little young..lol..
Bad drunken-daddy decision!