The NFL remained in a labor fight-induced holding pattern on Tuesday as players reported for work and the league sought to clarify its responsibilities of its post-Nelson ruling reality.

But DeMaurice Smith, the executive director of the NFL Players Association, chided the league for tolerating a day of "chaos" with players being denied full access to team facilities. 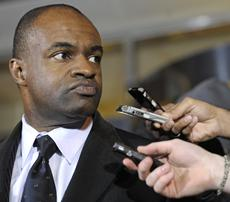 In an appearance on ESPN Radio, Smith alleged that some players had been turned away from team facilities.

"To be in a world where guys are showing up ... and being told to go home... it's petty and small at best," Smith said.

Players reported to work at multiple teams on Tuesday -- including the Carolina Panthers, Cleveland Browns, New York Jets and Dallas Cowboys -- but the NFL instructed teams not to allow them to work out or conduct any football activities.

That came one day after U.S. District Judge Susan Richard Nelson invalidated the lockout that was imposed on March 11. The NFL immediately appealed, and has asked Nelson to stay her ruling pending appeal. A ruling on that stay won't come until Wednesday at the earliest.

Also, the NFLPA asked Smith for further clarity about Monday's ruling, perhaps seeking to force the NFL to start the league year. The judge told the NFL to respond to the NFLPA's request by 6 p.m. ET on Wednesday.

Still, to Smith, Monday's ruling was clear that NFL players once again should have access to do their jobs.

"The court ruled yesterday that the lockout was illegal and it's lifted," he said.

NFL general counsel Jeff Pash said on ESPN that the league would adhere to the judge's ruling "in an orderly way."

"We anticipated this as a possible outcome," Pash said. "When we have rulings on the scope of the order, on the stay ... we will take all steps we need to take to comply with court orders."

But, in a scene reminiscent of the bickering that has typified the NFL labor struggle for months, Pash disputed Smith's characterization of Monday's ruling.

"I think it's quite a stretch to say what the judge did was say we broke the law," Pash said. He added the league expects to win on appeal.

Many players who reported on Tuesday were mindful of offseason workout bonuses included in their contracts that have been frozen and gone unpaid during the lockout.

Those bonuses were on Smith's mind, and he sounded an alarm of what could be yet another dividing point for the sides in the coming months.

"We expect those bonuses to be paid," Smith said.