Man who dressed like priest, stole collection plate from St. John Catholic Church in Jackson gets four to 20 years in prison 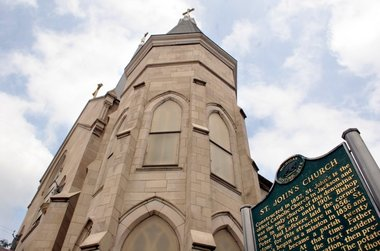 A Jackson man who dressed like a priest and stole a collection plate during Holy Communion was sent to prison Thursday for at least four years.

Fiddler, who has a history of crime, drug abuse and mental-health problems, stole a collection plate containing about $3,600 from St. John Catholic Church in November. The money was returned to the church.

He pleaded no contest in February to charges of larceny in a building and larceny of more than $1,000 but less than $20,000.

At the time of the theft, Fiddler was on parole for stealing from stores. His lawyer said Fiddler has "an enormous number of prior felonies and probably an equal number of misdemeanors."

Fiddler knows the difference between right and wrong, Dungan said, but he asked McBain to consider Fiddler's "major issues in conforming his behavior."

"Because of the way his brain works, it's just a lot more difficult for him than the average person," Dungan said.

Fiddler said he is an opiate abuser. At the time of the theft, he said, he was trying to monitor his own mental health medication and ran out of pills.

Assistant Prosecuting Attorney Nick Mehalco Jr. urged McBain to show no leniency, arguing that a man who would steal a church collection plate would steal from anyone.

"Nobody is safe — nobody's home, nobody's family," Mehalco said. "He has no limits."

"You've had nine parole violations, and this time you dressed up like a priest and stole from the church," the judge told Fiddler.