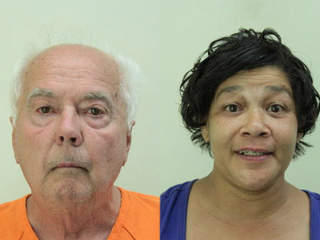 TAMPA - A 51-year-old woman tried to buy her 80-year-old father the services of a prostitute over Easter weekend, Tampa police said.

The pair, who listed their hometown as Dubuque, Iowa, were arrested on Nebraska Avenue, an area of Tampa known for prostitution activity.

According to the arrest affidavit, 51-year-old Pia Kirchberg offered an undercover police officer $20 if she would have sex with Kirchberg's elderly father.

Both Pia Kirchberg and 80-year-old Maurice Kirchberg were charged with soliciting for prostitution.

The father and daughter were among eight people arrested in the sex sting.

"Prostitution is illegal.  It doesn't matter how old you are," said police spokeswoman Laura McElroy. "If we catch you trying to solicit a prostitute you're going to jail."