Man Gets Shot for Eating Popcorn Too Loudly (UPDATED) 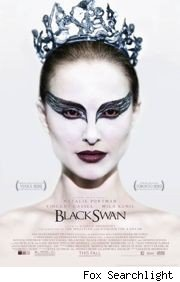 UPDATE: The original article at The Telegraph had its facts a little muddled. It turns out that it may have been the 27-year-old who was the shooter and the loud food muncher, meaning that the victim was just a poor guy standing up to a noisy moviegoer. (It's still a crazy -- and sad -- story.) The Register has the update. Thanks to the reader who pointed this out to us.

At the famed Alamo Drafthouse theater in Austin, Texas, there is a strict policy regarding disruptive moviegoers. If someone alerts a manager to your talking, cell phone using or in-any-way noisy activity, you are given one warning. There is no second warning. After that, you're kicked out of the building without a refund. It's a harsh but reliable system that ensures the quality of your film-watching experience.

But they have nothing on one disgruntled movie lover, who decided that a fellow audience member at a screening of 'Black Swan' was eating his popcorn far too loudly and shot him to death, therefore teaching him a valuable lesson about being respectful in a movie theater.

The incident occurred in Latvia -- which is surprising, since this whole thing is one bottle of Jack away from being a quintessential American experience -- where gun crime is a rarity. The exact details of this fundamental disagreement in theater etiquette are unknown at this time, but the violent exchange between the armed-and-angry 27-year- old and the 42-year-old popcorn muncher occurred when the film was over and the credits were rolling. The assailant, like 'Black Swan's Nina Sayers, had evidently been driven to the edge of his sanity.

Although movie theaters aren't typically seen as a place to go when you want to get shot to death, they're not completely free of the occasional act of violence. Most of it -- fist fights, minor riots, flashes of gang violence -- remains unreported, but ask any theater employee to regale you with tales and they'll gladly give you an earful. Sometimes, though, the story will explode onto the national scene. In 2008, a Philadelphia man quickly tired of the talkative family sitting in front of him during a screening of 'The Curious Case of Benjamin Button', so he pulled a gun and shot the father in the arm to shut them up -- a method that ensured their silence but also his incarceration.

Were these people in the right for shooting their fellow moviegoers? No, of course not -- this is a classic case of overkill (pardon the pun). However, if you're one of those jerks who likes to get chatty or whip out your cell phone during a movie, you should take immediate note: someone may very well shoot you for it. You have been warned.