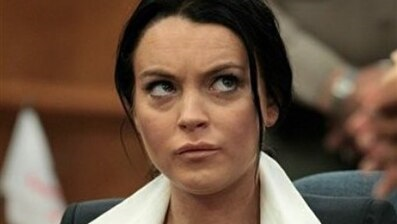 May 24: Lindsay Lohan sits in the courtroom during her hearing in Beverly Hills.

The troubled actress was first arrested in May 2007 on a misdemeanor drunk driving charge in Beverly Hills, then in July was arrested again in Santa Monica and charged with drunk driving, cocaine possession and driving with a suspended license, for which she pleaded guilty the following month.

In November, Lohan surrendered to a Los Angeles County Jail, and then in 2009 her probation was extended another year because she failed to complete a mandatory alcohol counseling program.

Cut to 2010 and Lohan’s legal jeopardy deepened as she violated the terms of her probation by failing to appear in court and missing the alcohol counseling classes, which then resulted in her serving time at Lynwood Correctional Facility in July. A few weeks later, the “Mean Girls” star failed a drug test and was handcuffed and taken to the slammer before posting bail that night, and during her court-enforced rehab stay at Betty Ford the 24-year-old was accused of allegedly tussling with a staffer at the clinic.

Then earlier this year, drama-prone Lohan was charged with felony grand theft by the Los Angeles County District Attorney for allegedly stealing a necklace from a Venice jewelry store.

With many court appearances, come many different outfits

Factoring in all the court dates, court postponements (like when she was partying in Cannes and couldn’t get back to the U.S for a hearing), arraignments, judge and prosecutor fees, jail visits (she has had three stints in the slammer – 84 minutes, two weeks and one evening before posting bail, mug shots (four and counting),  probation officers, random drug testing resources, SCRAM bracelets (these generally cost over $100 to install and have a daily fee of about $18) and LAPD security to and from court, how much is Lohan costing the taxpayer?

And given that Lohan has thus far refused to enter into a plea deal regarding the theft incident, her current theft case could potentially go to trial, costing Californians much more.

“Each court hearing can take hours of prosecutorial time, judicial time and judicial staff such as a court clerk, stenographer and bailiffs in the courtroom protecting Lindsay. If only 100 hours total was spent on her first DUI case out of the Beverly Hills Courthouse, you’re talking about a minimum of $10,000 just in prosecutorial/attorney time alone. Multiply that by the number of cases she has and you'll see that the Lohan case is costing this state tens of thousands of dollars," explained Criminal Defense Attorney RJ Manuelian. "The irony is, that the further Ms. Lohan is prosecuted ‘in the interest of justice,’ injustice is done to our state economy."

"What makes matters worse is that Ms. Lohan is still facing a possible probation violation from Judge Fox's court in Beverly Hills," Manuelian said. "If she goes to jail, that adds more financial burden to our state's financial crisesandit burdens our already overcrowded jails. In the end – more money we don't have. Scott Peterson's trial cost the state over $3 million, and Lohan’s latest case certainly has the potential to reach hundreds of thousands of dollars should it go to trial.”

Hollywood publicist Michael Sands, who has worked on a number of celebrity-related legal cases, also said Lohan has cost Los Angeles county well over one million dollars to date.

“If the stolen necklace case goes to trial, it will cost anywhere from $500,000 and up. In just one day with one court appearance, Lindsay could blow over $100,000 and we all have to foot the bill,” Sands said. “The legal fees for the prosecutors are totally exorbitant, and then to have to have police dignitary forces take her to court and guard her costs hundreds and hundreds of dollars per hour. She is a real tax burden to the state.”

Wohl did the raise the point that those involved in Lohan’s sentencing are only doing their jobs – and if it isn’t her they’re dealing with, it is someone else.

“Most of the people involved are just doing their jobs – whether they're dealing with Lilo or any other criminal, so they don't cost the taxpayers any extra, with the exception of overtime pay for the countless cops who have to provide courthouse security for her court appearances,” Wohl said. “The real inconvenience to taxpayers could come if her cases go to trial. Hundreds – perhaps more – will be dragged from their jobs to the courthouse to try and find 12 jurors who haven't been exposed to the details of Lohan's alleged ‘one woman crime wave.’ While the current Judge has all but sentenced her to jail, the reality is that no one has heard the evidence in her case. If she decides to have a trial, the reality is that LA could become host to the biggest three ring legal circus since OJ.”

- Deidre Behar contributed to this report.