Why Michael Vick Cancelled His Appearance on Oprah

Were His Dogs' New Owners or PETA Behind Michael Vick's Oprah Audible? 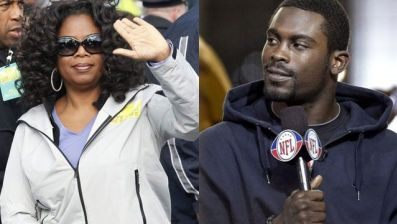 What caused Michael Vick to get cold feet and pull out of his Oprah interview?

Oprah Winfrey said Thursday that Vick canceled an interview with her scheduled for next week.

"He said personal reasons," Winfrey told The Hollywood Reporter. "We did a field trip with him. We had been shooting with Michael Vick. And the fact that he pulled out and all his peopleWe move on."

Could those "personal reasons" have something to do with the people who now own and care for the dogs he abused?

Some owners of dogs rescued from his dogfighting ring said he pulled out of the interview because he did not want to be confronted by them on TV, the New York Post reports.

Vick, who served 21 months in prison before resurrecting his NFL career with the Eagles, pulled out of a rare TV interview after the dog owners contacted Winfrey's producers asking for the chance to confront him on "Oprah," one claims.

"One of the adopters was contacted by one of Oprah's producers Tuesday night, who said there was preliminary interest in doing something with the dogs," said Richard Hunter, a Dallas radio personality who adopted one of the dogs. "Then, that same night, Vick's rep told Oprah's producers he was backing out [of the interview]. It would certainly be a coincidence if one didn't have something to do with the other."

FOX411s Pop Tarts also learned that after being informed of the planned interview, the People for the Ethical Treatment of Animals (PETA) sent a letter to Oprah to express their concerns that Vick may win her over with his tricks.

Oprah was our Person of the Year in 2009 for championing the causes against factory farming and fur. However, PETA President Ingrid Newkirk, who met privately with Michael Vick, wrote to Oprah with a concern over her upcoming interview, a representation from the animal rights organization said. We wanted to make sure that Oprah does not fall for the trick that Vick tried on PETA, saying that, to him, pet dogs were different from the avatars used in his fighting pit.

Although the NFL star told Newkirk when they met that he viewed his pet differently, a U.S Department of Agriculture (USDA) report on his dog fighting activities revealed that he even threw his own family dogs into the fighting pit to be torn to shreds while he laughed.

"Just as convicted pedophiles aren't allowed free access to children, anyone who is responsible for hanging, electrocuting, or shooting dogs and who got a rush out of killing them, as he admitted and his friends confirmed, and who caused them to suffer in other horrific ways, should never again be allowed access to dogs, Newkirk wrote in the letter to Winfrey.

Since going to jail for the dogfighting ring, Vick has been working with the Humane Societys anti-dog fighting program, and the organization argues he should be able to own a canine once again.

It is too soon for Michael Vick to have a dog. Pet-keeping is a privilege and he lost that privilege when he committed atrocious acts of cruelty in the months and years before his arrest in 2007, The Humane Society of the United States' President and CEO Wayne Pacelle wrote in a recent http://hsus.typepad.com/wayne/2010/12/michael-vick-pet.html blog. I do think that if his rehabilitation progresses and he handles the probation period flawlessly, it could be a good thing for Michael Vicks family to have a pet at the end of that process."

- Deidre Behar contributed to this report

posted by truesee  # 6:05 PM
Comments:
Geez, maybe Mr.Vick should contact the potus and ask him to intervein on his behalf.
If people knew the severity of pain and suffering that this person caused these animals before they died for a rush, they would be offended also.
C'mon obama, give Mr.Vick another pat on the back..!