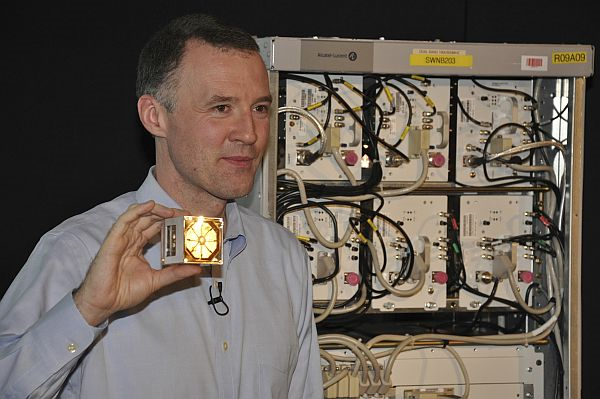 Wim Sweldens, the president Alcatel-Lucent's wireless division is seen holding a lightRadio cube, a small cell-phone antenna that can be deployed on lamp posts, buildings, and other places that can't accommodate a full-sized antenna. The cube integrates much of the regular workings of a conventional cell phone base station, seen behind Sweldens. (AP Photo/Alcatel-Lucent)         As cell phones have spread, so have large cell towers - those unsightly stalks of steel topped by transmitters and other electronics that sprouted across the country over the last decade.

Now the wireless industry is planning a future without them, or at least without many more of them. Instead, it's looking at much smaller antennas, some tiny enough to hold in a hand. These could be placed on lampposts, utility poles and buildings - virtually anywhere with electrical and network connections.

If the technology overcomes some hurdles, it could upend the wireless industry and offer seamless service, with fewer dead spots and faster data speeds.

Some big names in the wireless world are set to demonstrate "small cell" technologies at the Mobile World Congress, the world's largest cell phone trade show, which starts Monday in Barcelona, Spain.

"We see more and more towers that become bigger and bigger, with more and bigger antennas that come to obstruct our view and clutter our landscape and are simply ugly," said Wim Sweldens, president of the wireless division of Alcatel-Lucent, the French-U.S. maker of telecommunications equipment.

"What we have realized is that we, as one of the major mobile equipment vendors, are partially if not mostly to blame for this."

Alcatel-Lucent will be at the show to demonstrate its "lightRadio cube," a cellular antenna about the size and shape of a Rubik's cube, vastly smaller than the ironing-board-sized

The cube was developed at the famous Bell Labs in New Jersey, birthplace of many other inventions when it was AT&T's research center.

In Alcatel-Lucent's vision, these little cubes could soon begin replacing conventional cell towers. Single cubes or clusters of them could be placed indoors or out and be easily hidden from view. All they need is electrical power and an optical fiber connecting them to the phone company's network.

The cube, Sweldens said, can make the notion of a conventional cell tower "go away." Alcatel-Lucent will start trials of the cube with carriers in September. The company hopes to make it commercially available next year.

That would be welcome news in neighborhoods across the country, as the larger cell towers have sparked zoning fights from residents who deride them as eyesores and potential health hazards.

In the San Fernando Valley, for example, residents have been fighting cell tower proposals for years. In the past year they have met with some success defeating several proposals from T-Mobile to expand its network coverage.

In Northridge, residents have so far been able to convince city officials to block a proposed T-Mobile tower on top of a commercial structure at Saticoy Street and Louise Avenue, complaining it would be an eyesore, destroy property values and the radiation would pose a health threat.

Similarly in Sherman Oaks, residents last year convinced the South Valley Area Planning Commission to shoot down a separate proposal from T-Mobile to build a 49-foot-high tower on top of a three-story commercial building on Burbank Boulevard.

But for cell phone companies, the benefits of dividing their networks into smaller "cells," each one served by something like the cube antenna, go far beyond esthetics. Smaller cells mean vastly higher capacity for calls and data traffic.

Instead of having all phones within a mile or two connect to the same cell tower, the traffic could be divided between several smaller cells, so there's less competition for the cell tower's attention.

"If it is what they claim, lightRadio could be a highly disruptive force within the wireless industry," said Dan Hays, who focuses on telecommunications at consulting firm PRTM.

Rasmus Hellberg, director of technical marketing at wireless technology developer Qualcomm Inc., said smaller cells can boost a network's capacity tenfold, far more than can be achieved by other upgrades to wireless technology that are also in the works.