Sloan steps down as Jazz coach

Now, for the first time since 1988three years before Michael Jordan won the first of his six NBA titlesthe Jazz will have a new head coach on their bench.

Hes been there like this rock and all of a sudden the rock is gone, Boston coach Doc Rivers said of the 68-year-old Sloan. It's like your franchise moved or something. I dont know. It's just strange. 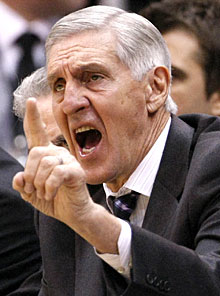 While Sloan expected to wake up refreshed knowing he was done game-planning and tussling with fiery superstars such as Deron Williams(notes), the rest of the basketball world was awakening to a new era.

Since Sloan took over in Utah for Frank Layden, there have been 245 coaching changes leaguewide13 alone by the Los Angeles Clippers.

Five current NBA teams (Charlotte, Memphis, Toronto, Orlando and Minnesota) did not even exist when Sloan was hired by the Jazz.

As a colleague, we'll miss him, said Lakers coach Phil Jackson, who along with Sloan and Pat Riley were the only coaches in NBA history to have 15-plus consecutive seasons with a winning record.

Sloan stepped down Thursday with 1,127 wins as Jazz coach and 1,221 overall (including his short stint in Chicago). The career total is the third-most in NBA history.

His decision came after an emotional loss to the Bulls on Wednesday night, a night that saw his former team and former players help hand the Jazz a 91-86 loss. It was their 10th loss in the last 14 games and third straight at home following a 15-5 start.

At halftime, Sloan and Williams clashed, reportedly over how a play was run. It wasnt the first time.

We had a disagreement, Williams told 1320-KFAN radio Thursday. I've seen him have worse ones with other players. Jerry's very fiery. I am, too. Sometimes we clash on things.

The All-Star point guard insisted there is no truth to the rumors that he forced the Hall of Fame coach out, and general manager Kevin OConnor also said it was false that Williams gave management a me or him ultimatum.

I would never force coach Sloan out of Utah, Williams said, deriding the media for twisting stories. He's meant more to this town, more to this organization than I have by far. I would have asked out of Utah first.

Sloan, who was choked up and wiped away tears during his farewell announcement Thursday, said there was no final straw. He simply said he didn't have the energy to coach any more, and that the losses were getting tougher and tougher to handle.

The one thing that did surprise Sloan was that longtime assistant Phil Johnson joined him in retiring.

I came with him and I'll leave with him, the 69-year-old Johnson said Thursday.

Jazz CEO Greg Miller and other top team officials tried to talk Sloan out of retiring and insisted that no one forced either coach out. OConnor said he even begged both to stay. Team officials made a second pitch Thursday morning after telling Sloan to sleep on it.

There'd be no changing his mind.

He is a little stubborn, I dont know if you noticed that about him, O'Connor said. But we're happy for him because when you can go out on your own call, that's pretty unique.

You have to be as a coach, but he had a system and the system was effective, Jackson said. Its not easy to have a team in Utah. It's not the biggest draw in the country as far as for free agents to go there.  As a colleague, we'll miss him.

What will Sloan miss?

Being around players such as Karl Malone, whom he said competed hard every day.

Yet even with Malone and John Stockton, the Jazz never did win an NBA title.

Thats one regret for Johnson, who had offers to be a head coach elsewhere but never accepted.

Everybody would like to win a world championship, said Sloan, who for all his success also never won Coach of the Year. But to come and compete (and make the NBA Finals) after you lose the first one (in 1997)  that was one of the most rewarding thingseven though we didnt win it.

Sloan began working for the Jazz as a scout in 1983, became assistant to coach Frank Layden on Nov. 19, 1984, and was named the sixth coach in franchise history on Dec. 9, 1988, when Layden resigned.

Few people have epitomized all the positives of team sports more than Jerry Sloan, NBA Commissioner David Stern said in a statement. A basketball lifer, Jerry was as relentless in his will to win on the sidelines for the Utah Jazz as he was as an All-Star guard for the Chicago Bulls. In over two decades as a coach, he taught his players that nothing was more important than the team.

Now the team moves forward with 48-year-old Tyrone Corbin, a former Jazz player who has been an assistant to Sloan the past seven years.

I have no desire for you to fill Jerry Sloans shoes, Jazz owner Gail Miller said. I'd like you to stand on his shoulders and move forward in the same direction knowing we are there to help lift you and help you do your job.

Team officials made it clear that Corbin is not an interim coach.

After so many years on the bench, Sloan had only a few bits of advice for his successor.

Be yourself, Sloan said

And follow the advice Sloan was given: Don't get on the officials too much and dont overcoach.

Sloan quipped that he got it half-right.

At his age, he wasn't looking for another job.

My wife has a job for me when I get home, Sloan said.

He also wasn't going to root against the Jazz.

Im not walking away hoping they lose, I guarantee that, Sloan said. I hope Ty does well, the team does well and the Miller family does well.

He said the same for Williams.

Most had similar hopes for Sloan, who built his reputation as a tough, gritty player in 755 games over 11 NBA seasons with the Bulls but was regarded as a fair and honest man.

He was one of my favorite people in the world, former All-Star Charles Barkley said.

Barkley wondered if there was a disconnect between old school and new school, particularly with Williams.

Maybe there is a shelf life for a coach, Barkley added.

We hope the transition is as seamless at is right now, O'Connor said. If we do about the same, in 2034 we'll have another one of these press conferences.

Corbin already began meeting with players and will coach his first game Friday night against the Phoenix Suns.

He promised a few changes in practice, and in film study, but hoped to continue with some of the lessons he learned under Sloan.

It was great to sit down with him and let him know firsthand I would be replacing coach and giving him an opportunity to voice as one of the leaders on this team some of his concerns and then where he think this team is and how I can help him and help this team be better, Corbin said.

Twenty-six losses in a row for the Cleveland Cavaliers, a continuing NBA record. The team is stuck at 8-45 on the season, and outside of the return of solid players like Mo Williams(notes) and Leon Powe(notes), the group doesn't really have much to look forward to. You can understand why this would leave a dispirited bunch to hit the floor in an otherwise-anonymous game against the also-lowly Detroit Pistons.

What wasn't excused was the team's effort. Temperament? Sadness? Frustration? Sure. Apathy? No way.

And after the Pistons downed the Cavs, Cleveland coach Byron Scott lost it.

The Cleveland Plain Dealer's Mary Schmitt Boyer has the story:

The performance was so bad that coach Byron Scott threw a fit at halftime and another one after the game, when he kept the locker room closed for 30 minutes.

But, frankly, he is at a loss to explain what is happening.

"I'm mad as hell because ... I can deal with losing, especially when our guys play as hard as they have in the last couple weeks," he said. "But I find it very hard to deal with when guys don't come out ready to play."

Scott is right to go off on his crew because, while the team has clearly struggled since the start of December (winning just once in that term), at least the effort was there on most nights. Poor play on both ends? Sure. Less-than-cerebral hoopage? No doubt. Sick of me asking questions?

Byron is sick of being out of answers:

"I thought we took a gigantic step backwards and it was all because of lack of effort," the coach said. "We had no sense of urgency whatsoever, and that kind of amazes me. When we've lost as many in a row as we lost and when you've been as close as we've been in the last four or five games and to be at home and come out the way we came out -- that amazes me."

Well, it shouldn't amaze Scott. But he shouldn't let it slide, either. Especially on one of the rare nights where Cleveland, and this isn't a joke, was actually favored to win.