Sales In Glock Pistols Up After Arizona Shootings 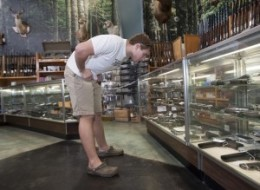 Hey, everyone. Not to unnerve you, but apparently, days after a madman went on a murdery rampage with a Glock in Arizona, Arizonans are heading to gun stores in droves to purchase the very same weapon used by Jared Lee Loughner. It's as good an example as anything to demonstrate that there really is no such thing as bad publicity, only an inplacable, gnawing cynicism that permeates our existence and sends us, sobbing, into a fetal position.

Michael Riley from Bloomberg News documents how we at last have stimulated some aggregate demand in something!

After a Glock-wielding gunman killed six people at a Tucson shopping center on Jan. 8, Greg Wolff, the owner of two Arizona gun shops, told his manager to get ready for a stampede of new customers.

Wolff was right. Instead of hurting sales, the massacre had the $499 semi-automatic pistols -- popular with police, sport shooters and gangsters -- flying out the doors of his Glockmeister stores in Mesa and Phoenix.

"We're at double our volume over what we usually do," Wolff said two days after the shooting spree that also left 14 wounded, including Democratic Representative Gabrielle Giffords, who remains in critical condition.

Of course, this is nothing new, nor is it a localized oddity:

One-day sales of handguns in Arizona jumped 60 percent on Jan. 10 compared with the corresponding Monday a year ago, the second-biggest increase of any state in the country, according to Federal Bureau of Investigation data. From a year earlier, handgun sales ticked up yesterday 65 percent in Ohio, 16 percent in California, 38 percent in Illinois and 33 percent in New York, the FBI data show, and increased nationally about 5 percent.

Federally tracked gun sales, which are drawn from sales in gun stores that require a federal background check, also jumped following the 2007 massacre at Virginia Tech, in which 32 people were killed.

No corresponding data detailing how sales of DEMON WEED are proceeding in the wake of this weekend's tragedy, but one has to imagine that they're up, if only because so many people maybe want to dull the pain that comes when you realize that you are surrounded by gun-crazy maniacs.