President Obama is riding a wave of popularity

Obama is riding a wave of popularity 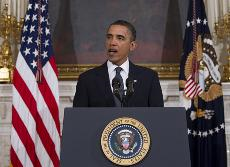 President Obama talks about the shooting of Rep. Gabrielle Giffords, D-Ariz., on Saturday.
Evan Vucci
AP
President Obama seeks to comfort the nation over the Arizona shootings while riding a surge of popularity.

A pair of new polls are giving Obama his highest approval ratings in months.

A Reuters/Ipsos survey gives Obama a 50% approval rating, up from 45% a month ago, and his highest rating in this poll since June.

The president "is getting a bump in his approval ratings from an improving economy but Americans want him to focus on reducing debt and spending," Reuters reports.

The AP reports that "Americans give higher marks to President Barack Obama and congressional Republicans after a holiday season of compromise paid dividends for both."

Obama's end-of-the-year roll in 2010 included a tax cut deal with Republicans, as well as an end to the military's ban on gays and new health care benefits for 9/11 responders.

And, compared with just after the November elections, more now express confidence that Obama and the new Republican-controlled House can work together to solve the country's most urgent problems, chief among them the struggling economy.

posted by truesee  # 12:38 PM
Comments:
Wow, what a wave of popularity. Astounding.

# posted by Todd : 12:49 PM
Wow Todd , you just refresh my mind as to the reason why I started to blog on this site anyway,unlike you I from time to time I agree with you on some issues that your being fair on but President Obama and Sarah Palin isn't one of them. It's like we live in two different world, could it be culture. I haven't blog because of the hate out there.

# posted by louise black : 2:12 PM
I have a hard time thinking of anything Obama has done that I can agree with. I guess signing the tax compromise was the only thing that comes to mind.

I don't think there's anything "cultural" about disliking Obama's policies.

I do, however, think that some of Obama's supporters and detractors are thinking only in cultural terms. They are only thinking he is a black man, rather than a US president, and supporting him, or attacking him, on those terms. I am very opposed to that, and think it's dangerous to support or attack a US president based on the color of his skin -- whether that skin is black, brown, or white.

The mainstream media and people like Bill Maher would have everyone believe that all of Obama's critics are racist and all of his supporters are "just normal people". This is delusional and racist in itself. The fact is that a small percentage of the US population is racist (in either direction), and not in enough volume to swing the elections either way.

That being said, I really wish you would talk about specific points you disagree with, Louise, rather than labeling people like Sarah Palin as "hateful" or whatever you think. Why not say specifically what she said that was "hateful"? That's how a good debate takes place -- on IDEAS and FACTS, not emotions. When you talk about "rhetoric", that's what it means -- nasty talking points that avoid the issue. So let's not dwell in rhetoric.

# posted by Todd : 4:23 PM
Here a couple of examples; she always as you sometime talking about" taking back our country",deem yours. "We are the real American" Who are we , am I not an American.As I have said many times before my grandma was the daughter of an Native American.Now!whose the real American.

# posted by louise black : 11:23 PM
Louise I've asked you several times, where do you have your card.? no reply
A real Indian would know what I was talking about.
Please Louise tell me about the 3 fires!
Real Indians never refer to their grandmas as native American.
my family are members of the Sault Tribe of Chippewa Indians.