Thief tried to sell stolen ladder to its owner twice 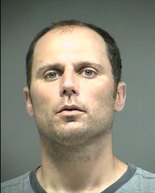 On July 28, a man called Washington County Sheriff's deputies saying that Gilman tried to sell him a ladder stolen from him just days before.

The victim kept Gilman on site until deputies arrived and arrested him. After Gilman was released from jail, Gilman called the same man and asked if he still wanted to buy a ladder that he listed on Craigslist, deputies said. Gilman was unaware that he was calling the same man who helped deputies arrest him.

The victim reported the incident to deputies and undercover investigators arranged a meeting time with Gilman. Deputies said they bought three stolen ladders from Gilman on Aug. 3, then arrested him.

On Aug. 23, he pleaded guilty to the burglary charge and one count of first-degree theft and the other charges were dismissed.

Sentence: County prosecutor Chris Lewman said Gilman was sentenced to six months in jail and three years of formal probation. The state is still determining how much Gilman will pay restitution.