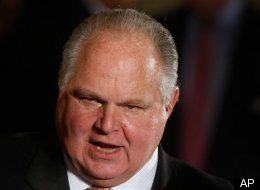 The paper reports that, on his Tuesday show, Limbaugh spent some time discussing Roger Vinson, a District Court judge for the Northern District of Florida. Vinson had recently announced that he was likely to allow a full hearing for a challenge to the federal health care bill. Limbaugh told his listeners that the judge was a longtime hunter and amateur taxidermist, and that he had once killed three brown bears and mounted their heads above the entrance to his courtroom--in order, Limbaugh said, to "instill the fear of God into the accused."

"This would not be good news" for supporters of the health care law, he added.

Unfortunately, none of that information is true.

It came from a Wikipedia user called Pensacolian--Vinson's court sits in Pensacola, Florida--who, on Sep. 13, updated Vinson's page to include these sentences:

"Vinson is an avid hunter and amateur taxidermist. After a 2002 hunting trip during which he killed three brown bears, Vinson had their heads mounted over the door through which defendants must pass to enter the courtroom. The heads were later removed following complaints by local defendants' rights groups."

The information was removed on Tuesday afternoon. Pensacolian named as the source for this information a news article which the Times found did not exist. The paper also spoke to Vinson, who corrected the record:

"But, in fact, Judge Vinson has never shot anything other than a water moccasin (last Saturday, at his weekend cabin), is not a taxidermist and, as president of the American Camellia Society, is far more familiar with Camellia reticulata than with Ursus arctos...'I've never killed a bear,' he said Wednesday, 'and I'm not Davy Crockett.'"

posted by truesee  # 7:22 AM
Comments:
I do not trust any information that comes from Wikipedia.