Obama Demeans His Own Supporters

Obama Demeans His Own Supporters 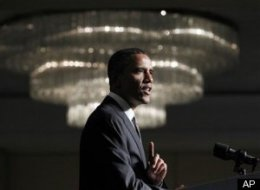 Oh, these are just some of my favorite moments in the Obama presidency:

PRESIDENT OBAMA, at a DNC event last night in Greenwich, Conn.: "[A]fter being in this job for two years, I have never been more optimistic about America. I am optimistic partly because we did some really tough things that aren't always popular but were the right things to do. Š Democrats, just congenitally, tend to get -- to see the glass as half empty. (Laughter.) If we get an historic health care bill passed -- oh, well, the public option wasn't there. If you get the financial reform bill passed -- then, well, I don't know about this particularly derivatives rule, I'm not sure that I'm satisfied with that. And gosh, we haven't yet brought about world peace and -- (laughter.) I thought that was going to happen quicker. (Laughter.) You know who you are. (Laughter.)

Fun fact! This fundraiser took place at the home of a "Rich Richman." Make of that what you will!

First of all, I commend the president on some touches to this schtick that speak to historical accuracy. You see, when this usually gets trotted out, we hear that the left is too insistent that we have a single-payer health care system. That's when I have to step in and point out the obvious -- that the left-most health care activists and legislators actually conceded single-payer in advance in an effort to have a health care reform package that stood a fighting chance of passing Congress.

Usually, the left gets little credit for how tremendously accommodating they were during that debate, so it's nice to see the President acknowledge that the point of contention eventually became the public option and the way he screwed over everyone who had originally accommodated him. Snide humor, about what a dick you are, works best when it's a little bit accurate!

Now, to be fair, there have also been those times where I've interjected my body between the White House and their despised "professional left" and reminded the President's critics that the President doesn't have magic powers to close GITMO or to give Ben Nelson a brain, and that it's actually illegal to drown Evan Bayh in a mop bucket, even though the soapy water and his bloated remains would each make better legislators than he is now. They'll point out, "But Obama could have fought harder!" And I'll point out that yes this is true, but Congress and its powers nevertheless exist, and whether he would have succeeded or failed is going to have to be a tale we'll have to tell our children, from inside Carl Paladino's Prison For The Poors, between the gruel feeding and bedtime.

Mostly, however, the so-called "professional left" has a string of very good cases. Obama is to the right -- let me repeat: TO THE RIGHT -- of President George Bush, Vice President Dick Cheney, John Yoo, Jay Bybee, et al. -- on the issues of state secrets, warrantless surveillace, and detainee policy in Bagram, and has even come up with something that gives his predecessors pause: the claimed right to assassinate an American citizen at his whim! Obama, and his most idiotic defenders, seem to think that all of the people who built a career criticizing Bush for abuse of executive powers should just give Obama a pass -- never mind that he ran on a platform of dismantling those powers.

Another good example: he's also slowly ceding ground to the Republicans on matters of LGBT rights. Actually, all Democrats are slowly ceding this ground! But it was the Obama White House that raced to get some anonymous sources to reporters to remind them on the same day same-sex marriage proponents won a great civil rights victory that the White House was opposed to the civil right, itself.

Dick move. I mean, he could have waited! Let the LGBT community have a day to celebrate!

But look, the joke here is on Obama. While Robert Gibbs was yelling at the "professional left," the "amateur left" -- that is to say, the Democratic base, was sticking by Obama, steadfastly. Traditional Democratic voters don't actually see the glass as half-empty and they aren't upset that world peace hasn't been obtained and they don't hold it against Obama that the world isn't perfect for everyone forever. Insert joke about the relative, real-world influence of progressive bloggers and I shall raise a chorus of titters along with you, even as I encourage you to not be dismissive -- but the fact remains, the liberal vote seems to be sticking by Obama through thick and thin.

What's eating the indies? Well, I have to imagine that a large part of it is that the boldness that attracted them to the Obama campaign has only shown itself in fits and starts since. And so, they drift away. Part of what amuses me in this whole situation is that the White House has obviously felt this criticism, but they've assigned it to the wrong people. It's a great way of potentially alienating yourself to both groups without substantively addressing the criticisms of either.

At any rate, November is just a few weeks away. So, laugh it up while you still can!

posted by truesee  # 10:49 PM
Comments:
Boy oh boy, this blogger is delusional and all over the map. He seems disoriented. Probably because of the steam roller that is on the way.