Woman worked on effort for 7 years 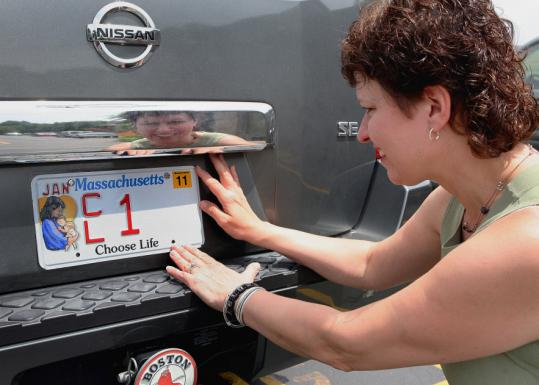 Massachusetts, a state known for its liberal political climate, is about to offer motorists specialty license plates that express opposition to abortion rights.

The new “Choose Life’’ plate, which features an illustration of a woman cradling an infant, becomes one of 18 Massachusetts tags that provide publicity and funding for causes, including breast cancer research, youth hockey, and environmental preservation. They cost drivers $90 every two years.

After the state recoups the cost of producing the “Choose Life’’ plates, the proceeds will go to organizations that encourage women with unwanted pregnancies to consider options other than abortion, such as adoption.

Massachusetts is only the second New England state, after Connecticut, to offer the “Choose Life’’ plates.

First offered by Florida a decade ago and now available in about two dozen states, the plates are coming to Massachusetts because of an often lonely campaign begun in 2003 by Merry Nordeen, 47, a secretary at St. Joseph Parish in Wakefield.

“I prayed really hard for this — I prayed for seven years, and God didn’t disappoint me,’’ she said in a phone interview.

Her goals, she said, are to raise money for groups that counsel women with unplanned pregnancies to consider adoption, or provide financial support to help the woman raise her child if money is tight, as well as to “give people a way to spread the message about life and . . . to get that message to the people who need to see it.’’

Some abortion-rights groups have criticized the plates. But legislative approval is not required in Massachusetts to create specialty tags. Any registered charitable organization can submit a design to the Registry of Motor Vehicles, post a $100,000 bond to protect the state from financial loss, and obtain applications and fees from at least 1,500 drivers who want the new plates. The state returns the bond if more than 3,000 of the specialty plates sell within two years.

“The statute governing the issuance of special plates is very clear,’’ Adam Hurtubise, a spokesman for the Department of Transportation, said in a statement yesterday. “The group seeking this special plate met all the statutory requirements for a special plate.’’

The $90 two-year fee includes $40 for the specialty plates, plus a $50 two-year registration fee. The state will retain $12 of the $40 fee to cover the cost of printing the plates. The remaining $28 balance will go to Choose Life Inc., a Massachusetts nonprofit that says it will direct the money to organizations that counsel women with unplanned pregnancies and that do not “counsel in or refer for abortion.’’ When a plate is renewed, the full $40 fee will go to Choose Life Inc.

Andrea Miller, executive director of NARAL Pro-Choice Massachusetts, said she fears the plates “will funnel money to organizations that provide false, misleading, medically inaccurate, and in fact disproven information to women who have unintended pregnancies and who are seeking guidance about what their options are.’’

But she said NARAL had no plans to create a plate promoting abortion rights or to mount a legal challenge.

Nordeen credited a group at St. William’s Church in Tewksbury and other volunteers, including many people from Catholic parishes, with helping her sign up about 1,700 customers. An anonymous donor provided the $100,000 bond, she said.

Brigitte Amiri, a senior staff attorney for the American Civil Liberties Union’s Reproductive Freedom Project, said legal challenges to the “Choose Life’’ plates generally fall into two general categories: those where proponents have challenged a state’s denial of their application and cases where a state has approved a “Choose Life’’ plate but not provided an equal opportunity for a pro-abortion rights plate.

Courts have disagreed over whether the message on the plates represents government speech or private speech, and whether the government has the responsibility to offer the same opportunity to both sides.

“The courts are all over the map,’’ Amiri said. “I would say that the predominant view is that the license plates are a combination of private speech and government speech, and as a result, the government can’t unfairly pick and choose among which messages it wants on its plates.’’

In South Carolina, the state chapter of Planned Parenthood sued when the Legislature passed a law establishing the “Choose Life’’ plates without also approving a similar plate supporting abortion rights. A federal appeals court found that the government had engaged in viewpoint discrimination. South Carolina lawmakers then used an administrative process for specialty plates to approve the “Choose Life’’ plates a second time, said Amiri.

In Illinois, “Choose Life’’ proponents lost their battle when a federal appeals court upheld the Legislature’s refusal to allow plates that discussed abortion. The court said the government could prohibit categories of content, as long as it did not promote one viewpoint over the other.

But in Tennessee, where the Legislature approved a “Choose Life’’ plate but not a plate with the opposing view, a US appellate court found that the message on the plate was permissible because it was government speech, and the Legislature had a right to author its own message — particularly since purchasing the plates was voluntary.

In Massachusetts a lawsuit does not appear imminent.

“There is a procedure for any organization that wants to get plates like this to follow, and it is open to everyone,’’ said Christopher Ott, a spokesman for the ACLU of Massachusetts.