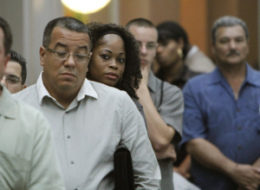 The Senate rejected Wednesday -- for the fourth time -- a bill that would have reauthorized extended benefits for the long-term unemployed, by a vote of 58 to 38. Democrats will not make another effort to break the Republican filibuster before adjourning for the July 4 recess.

By the time lawmakers return to Washington, more than 2 million people who've been out of work for longer than six months will have missed checks they would have received if they'd been laid off closer to the beginning of the recession.

Only two Republicans, Sens. Olympia Snowe and Susan Collins of Maine, crossed the aisle to support the measure. That gave Democrats 59 of the 60 votes they needed to break the GOP filibuster, but without the late Sen. Robert Byrd (D-W.Va.), Nebraska Democrat Ben Nelson's nay vote was enough to kill the bill.

(The final tally shows only 58 yea votes due to arcane rules of Senate procedure, which require Senate Majority Leader Harry Reid (D-Nev.) to vote against the bill in order to allow for another vote on it in the future.)

"We will vote on this measure again once there is a replacement named for the late Senator Byrd," Reid said in a statement after the vote. "In the meantime, I sincerely hope that Republicans will finally listen to the millions of unemployed Americans who need this assistance to support their families in these tough times. These Americans and millions more demand that Republicans stop filibustering support for unemployed workers."

Already, more than 1.2 million people out of work for longer than six months have missed checks since federally-funded extended benefits lapsed at the beginning of June.

"Senators had a chance to put election year posturing aside and one too few rose to that challenge," said Judy Conti, a lobbyist for the National Employment Law Project. "It's a sad night, especially for the over one million workers and their families who will have little cause to celebrate this holiday weekend. It is a disgrace and an absolute slap in the face to basic human decency."

During the past several weeks, Reid and Sen. Max Baucus (D-Mont.) trimmed a broader spending bill that included the benefits among a host of other domestic aid programs. They reduced the bill's 10-year deficit impact from $134 billion to $33 billion -- the cost of reauthorizing extended unemployment benefits through November -- but to no avail.

This week, Reid and Baucus pulled out the unemployment benefits as a $33-billion standalone bill, attaching an extension of the homebuyer tax credit, yet it wasn't enough of a sweetener to overcome the deficit demands of most Republicans and Ben Nelson.

Though there is some talk within their caucus of offsetting the cost of unemployment benefits to keep them from adding to the deficit, Democratic leaders refused to cave; they argued that because the cost of federally-funded extended benefits has never been offset, deficit neutrality shouldn't suddenly become a requirement for emergency aid.

Republicans offered alternative bills that would have paid for extended benefits with unused stimulus funds. "The only reason the unemployment extension hasn't passed is because our friends on the other side have refused to pass a bill that doesn't add to the debt," Senate Minority Leader Mitch McConnell (R-Ky.) said after the vote.

Republicans and some Democrats are uneasy about the unprecedented duration of benefits made available to the unemployed by last year's stimulus bill and subsequent acts of Congress, which in some states reaches 99 weeks. Without those provisions, layoff victims are currently eligible for only 26 weeks of benefits in most states, while the average unemployment spell is 34 weeks.

Lurking beneath the deficit concerns for some members is the suspicion that the extended benefits discourage people from looking for work -- even though there are five people vying for every available job and a full third of the 15 million unemployed don't actually receive the benefits.

If Congress eventually does reauthorize the aid, people eligible for extended benefits during the lapse will be paid retroactively. Failure to do so would be unprecedented: Since the 1950s extended federal benefits have never been allowed to expire with a national unemployment rate above 7.2 percent. The current rate stands at 9.7 percent.

Reid vowed earlier on Wednesday that the Senate would try again. "We're not moving away from this issue," he said. "We'll be back to haunt [Republicans] for what they're doing to people who are in such desperate shape."