Man wounded in shooting after Beach party for Michael Vick 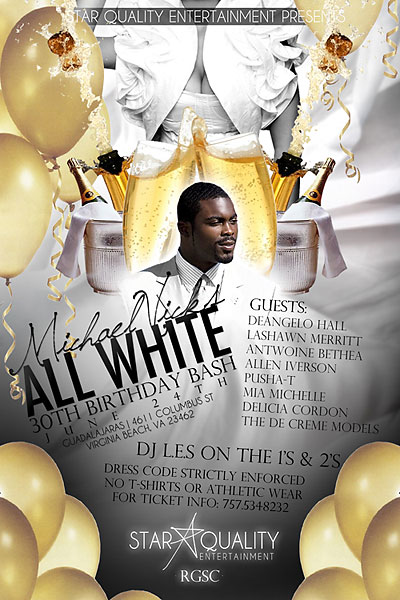 Quanis Phillips, co-defendant in Michael Vick's dogfighting case, was taken to a hospital.

According to guests, hosts and a representative of Philadelphia Eagles quarterback Michael Vick, the Newport News native came and went from his 30th birthday bash at the Town Center Guadalajara restaurant overnight Thursday without conflict.

But shortly after his departure from the soiree early Friday, tempers flared and shots were fired around the corner from the club, leaving a man with at least one gunshot wound to his leg. Police declined to say who was shot.

Quanis Phillips, a childhood friend of Vick's who was a co-defendant with the football player during his dogfighting trial, ended up in a hospital.

Phillips checked into Virginia Beach General Hospital and was discharged around 3 p.m., said Sentara spokesman Dale Gauding. He would not disclose whether Phillips had been shot.

Shalamar Davis, 29, who attended the party, said she recognized the shooting victim as Phillips.

"His friends were dragging him around the corner and blood was everywhere," she said.

When officers arrived at Guadalajara, the shooting victim was no longer at the scene, police said. He'd been taken in a vehicle, which a Virginia State Police trooper pulled over on Columbus Street near the intersection of Independence Boulevard, according to a police news release. An ambulance then took him to a hospital.

Investigators have made no arrests and say witnesses to the shooting have refused to talk. Vick is not a suspect and "his name has come up nowhere in any of our investigative reports," said Officer Jimmy Barnes, a police spokesman.

Police have described the shooter only as a black male wearing a white tank top and driving a white Cadillac Escalade.

Vick and Phillips are on state and federal probation from 2007 and 2008 dogfighting convictions. Phillips cooperated with prosecutors in their case against Vick, signing papers saying the quarterback had helped kill eight pit bulls that performed poorly in fights. He was released from federal prison on Feb. 20, 2009, after serving 21 months. Vick was released from prison in May that year.

A source close to Vick said Phillips was not invited to the party. Officials within the court system and several defense lawyers said they've never seen anyone get a probation violation just for associating with a felon without permission.

But the shooting has shoved Vick into the limelight once more. Both the Eagles and the NFL said Friday they're looking into the incident.

"We are already looking into it to determine the facts. And that's really all we can say at this point," said Greg Aiello, the NFL's senior vice president of public relations. "Yes, we're going through the process."

Aiello said NFL Commissioner Roger Goodell was aware of the incident but would have no immediate statement. When Goodell reinstated Vick to the NFL last July, he told him in a letter that "among the conditions of this reinstatement, you are required to abide by the terms of the supervised release that were imposed on you by the court, which include not committing any further crime, limits on who you may associate with, prohibitions regarding drug and alcohol use, possession of a firearm or other dangerous weapon, and forbidding you to own, possess or be involved with the sale of any dog."

But, Aiello said Friday, "there's certainly no way we can address whether any conditions have been violated."

Vick's party, advertised on Facebook and Twitter as Michael Vick's All White 30th Birthday Bash, was open to the public and drew about 300, organizers said. Celebrities such as LaShawn Merritt, Allen Iverson and Pusha T were invited. Admission was $30 and guests were asked to wear dressy white attire.

"It was a flawless evening. No altercations inside the club," Fabijan said. "This was an event where you dress nice. We had no problem with security at all."

Jones declined to disclose who threw the party. Fabijan said Vick and his entourage of about 10 people, including security, left about 1:55 a.m. The shooting happened about 15 minutes later, police said.

"He was gone before any of the mayhem had taken place," Jones said.

"Michael was not involved in any shooting there," he said. "Not only wasn't he involved, he wasn't present when any of that happened."

Phillips, known as "Q," and Vick were both integral parts of a dogfighting operation, dubbed Bad Newz Kennels, started in 2001 on land Vick bought in Surry County. They were convicted in 2007 and 2008 of dogfighting charges connected to the operation.

Generally, federal judges have wide discretion in sentencing for a probation violation. For minor violations, a defendant will usually not serve time. Crimes of violence and possession of a firearm require mandatory violations that usually result in jail terms.

During a football camp he's hosting at Hampton University, Vick was asked by a reporter Friday whether he had any comment on the incident.

"Watch what you do. Pick and choose your friends carefully," he said. "You just can't put yourself in vulnerable situations."