Kids Looking For Summer Jobs Should Give Up Now

This year is shaping up to be even worse than last for the millions of high school and college students looking for summer jobs. 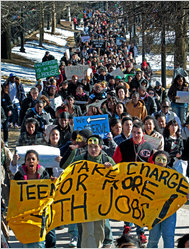 Young people in Massachusetts marched to the State House in Boston to protest cuts in financing for jobs.

Another Dismal Summer for Teenagers

Some state governments are cash poor. Kentucky has pulled back on mowing lawns at some facilities to save money.

State and local governments, traditionally among the biggest seasonal employers, are knee-deep in budget woes, and the stimulus money that helped cushion some government job programs last summer is running out. Private employers are also reluctant to hire until the economy shows more solid signs of recovery.

So expect fewer lifeguards on duty at public beaches this summer in California, fewer workers at some Massachusetts state parks and camping grounds and taller grass outside state buildings in Kentucky.

Students seeking summer jobs, generally 16 to 24 years old, are at the end of the job line, behind the jobless baby boomers who are competing with new college graduates who, in turn, are trying to elbow out undergraduates and high school students.

With so many people competing for so few jobs, unemployed youth “are the silent victims of the economy,” said Adele McKeon, a career specialist with the Boston Private Industry Council who counsels students on matters like workplace etiquette, professionalism and résumé writing.

Getting that first job “is an accomplishment, and it’s independence,” Ms. McKeon said. “If you don’t have it, where are you going to learn that stuff?”

The unemployment rate for the 16-to-24 age group reached a record 19.6 percent in April, double the national average. For those job seekers, said Heidi Shierholz, an economist at the Economic Policy Institute, “This is the worst year, definitely since the early ’80s recession and very likely since the Great Depression.”

Or as researchers at Northeastern University, who issued a report in April on youth unemployment, put it, “The summer job outlook does not appear to be very bright in the absence of a massive new summer jobs intervention.”

Still, the poor numbers this year are not solely a symptom of the continued weak economy. For generations, government data shows, at least half of all teenagers were in the labor force in June, July and August. Starting this decade, though, the number of employed teenagers began to drop, and by 2009, less than a third of teenagers had jobs. This year, the number could fall below 30 percent.

That is a stark contrast to the job market for recent college graduates seeking full-time employment — a market where this is actually a slight increase from this time last year.

There is no simple explanation for the large drop-off in summer jobs this decade, though experts say that more high school students are choosing to volunteer and do internships to burnish their college applications. But the Northeastern researchers said a large number of youths had been left out of the work force and wanted to get back in.

The forecast for this summer is so dire that high school students took to the streets this year in Washington, Boston and New York to push lawmakers to come up with money for summer youth jobs programs as Congress did last year, allocating $1.2 billion for a program for low-income youths.

On Friday, the House passed a measure that included the summer jobs provision, though its future in the Senate this week is uncertain.

The Northeastern researchers estimated that an additional $1 billion federal infusion would create some 300,000 job slots this summer, barely putting a dent in the demand for jobs.

Still, those types of positions are desperately needed, said Neil Sullivan, executive director of the Boston Private Industry Council, which works with private and public employers to place students.

For students like Anthony Roberts, 18, and Deandre Briber, 18, at the Prologue Early College High School in Chicago, the federal money offers some hope. Both are applying to the alternative school’s summer jobs program.

“It was great last summer,” he said. “We had 80 to 90 kids kept off of the street seven or eight weeks. They were able to come right back to school without any problem” in the fall, he added. “What’s happening right now in Chicago, you let these kids out there for four or five weeks, we are going to lose some of them. That’s just the nature of the streets.”

Mr. Briber, who graduates next January, said he had applied at T.J. Maxx, Target, Kmart, and at a local docking company, with no luck. Having an income will help ease the burden on his mother, he said. Also, he said, “I feel like I do need to get a job because I’m kind of a handful. I want things, clothes, and to take care of myself. I just want to be on my own, to help out with bills.”

Mr. Roberts, who graduates in June and plans to attend college, said he had been searching for a job for a year and a half. Everywhere he goes, Mr. Roberts says, there are other teenagers ahead of him. “It bothers me, but at the same time,” he said, “I try not to let it bother me.”

In Boston, at the Charlestown High School, Jamila Hussein, 19, said she had been running into the same problem in looking for a part-time job in retail or restaurants. “It’s harder than it sounds,” said Ms. Hussein, who has a summer internship lined up in July to clerk for a judge. “Right now, some of the things, even if they are available, you have adults looking.”

Last week, Ms. Hussein was at the office of Ms. McKeon, the career specialist with the Boston Private Industry Council. The partnership with the private industry council and public schools is well entrenched, about 30 years old, Ms. McKeon said. Even so, she said, “we’ve never seen it like it is now.”

Jada Bonner, 15, another student at Charlestown High, was at Ms. McKeon’s office applying for a summer job through a community program. “I just want a job, independence. I don’t want to ask my mom 24/7 for pocket money, and she might not even have it,” she said.

While cities like Boston and New York have had to cut summer youth jobs programs, Cincinnati has maintained a $1 million budget for its youth initiative the last few years because of the mayor’s commitment to the program, according to Jason Barron of the mayor’s office.

About 700 high school and college-age youths will be hired to create murals, landscape, work in the parks department, serve as junior counselors and intern at neighborhood recreation centers, he said.

Elsewhere, the Interior Department has committed to hiring at least 12,000 youth in 2010 — a 50 percent increase over the 8,000 in 2009 as part of its Youth in the Great Outdoors initiative.

But for the second consecutive year, CareerBuilder.com found in its summer hiring forecast that a vast majority of employers did not intend to hire seasonal help. “Summer hiring plans clearly show that they are still waiting to see what the future brings before they move forward with recruitment,” said Rosemary Haefner, vice president for human resources.

Still, Ms. Haefner said, there have been some positive signs, like an increase in job postings.

Retailers like American Eagle Outfitters are hiring at various locations, including its flagship stores in New York City, where it plans job fairs in June. In tourist spots like Atlantic City, businesses are expecting a rebound in seasonal hires, according to the Convention and Visitors Authority.

To which Mr. Sullivan of the Boston Private Industry Council, said, “Everyone has fond memories of their summer jobs as they grew up.”

“For almost half of this generation,” he said, “that has been lost.”