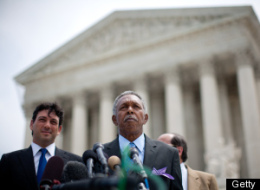 Otis McDonald (center), lead plaintiff in case against Chicago's handgun ban, speaks at a news conference outside the U.S. Supreme Court building after the announcement of a ruling in their case seeking to overturn Chicago's ban on handguns in D.C. Monday. The court overturned the ban, a victory for McDonald and gun rights groups such as the National Rifle Association.

On Monday, the Supreme Court upheld a challenge to Chicago's 28-year-old handgun ban, which ultimately signals the end of the ban on handguns in Chicago and Oak Park. As gun rights were extended throughout the country by SCOTUS, Chicago was recovering from another violent weekend that left at least 29 shot and three dead.

Even with the gun ban in place, shootings in Chicago have been rampant. Last weekend, at least 52 were shot and ten killed in just three days, and this weekend the gunfire continued. According to CBS, shots were fired into a group of about 30 people Sunday night--likely a crowd gathering in Uptown after the Gay Pride Parade. Two men were wounded in the incident, at least one suffered serious injuries.

CBS reports that another rash of shootings occurred between 10:45 p.m. Saturday and 4 a.m. Sunday, where at least 13 people were shot and one person was killed. Most of the incidents took place on the Northwest and Southwest sides.

From midnight to 6 a.m. on Saturday, another 13 people were shot--two fatally, the station reports.

Chicago Police Department statistics, we are told, reveal that the City's handgun murder rate has actually increased since the ban was enacted and that Chicago residents now face one of the highest murder rates in the country and rates of other violent crimes that exceed the average in comparable cities.

Monday's decision did not explicitly strike down the Chicago area laws, ordering a federal appeals court to reconsider its ruling. But it left little doubt that they would eventually fall.

The court did, however, explain that the decision does allow states to continue regulating handgun use, writing that the decision "limits (but by no means eliminates) their ability to devise solutions to social problems that suit local needs and values."

Mayor Daley, expecting the Supreme Court to rule the way it did today, told the Associated Press last week that he had no intention of going down without a fight.

"We're not going to roll over," Daley told the AP, adding that he plans to put in place all sorts of restrictions to make it tougher to buy guns and easier for police to know who has them.

"Just like they did in Washington, D.C., the city of Chicago is going to try to make it as difficult and discouraging as humanly possible to keep people from having guns in their homes for personal protection," Dave Workman, spokesman for the Bellevue, Washington-based Second Amendment Foundation said.

Chicago Reader reporter Mick Dumke wrote Monday that Daley and his allies in the City Council could "act as soon as this Wednesday with legislation designed to curtail handgun access, potentially including regulations on licensing and sales as well as training requirements."

posted by truesee  # 6:29 PM
Comments:
After every weekend we read these stories in Chicago. This proves beyond any shadow of doubt that gun bans DON'T WORK! Criminals don't obey the law.