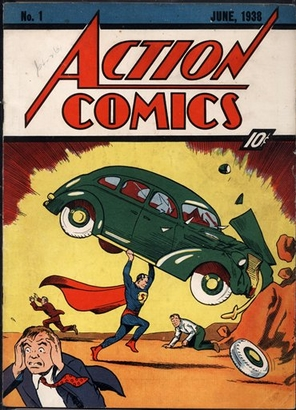 AP – In this comic book cover photo released by ComicConnect/Metropolis Comics, a copy of the 1938 edition …

NEW YORK – The record price for a comic book, already broken twice this year, has been shattered again.

A copy of the 1938 edition of Action Comics No. 1 sold Monday for $1.5 million on the auction Web site ComicConnect.com. The issue, which features Superman's debut and originally sold for 10 cents, is widely considered the Holy Grail of comic books.

The same issue sold in February for $1 million, though that copy wasn't in as good condition as the issue that sold Monday. That number was bested just days later when a 1939 comic book featuring Batman's debut sold for $75,000 more at an auction in Dallas.

There are about 100 copies of Action Comics No. 1 believed to be in existence, and only a handful in good condition. The issue that sold Monday was rated slightly higher than the one that sold in February; it had been tucked inside an old movie magazine for years before being discovered.

The issue was bought from a private collector and then sold by Stephen Fishler and Vincent Zurzolo, the co-owners of ComicConnect.com. It was bought minutes after being posted Monday at the asking price of $1.5 million by "a hardcore comic book fan," Fishler said.

"There's been a lot of attempts to acquire this book over the last 15 years," he said. "The recent activity, I guess, did the trick."

Fishler speculated that the sudden burst of record-priced sales are due to "pent-up demand." Issues of such prized comic books rarely become available for purchase. Rarer still are issues in such good condition.

"I can't imagine another book coming on the market that exists that would top this," Fishler said. "This may be the final say — at least for the next 10 or 20 years — for a record price of a comic book."