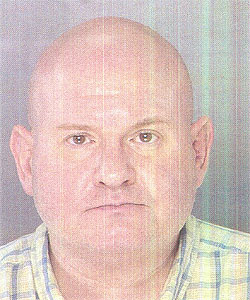 James B. Shimsky, a priest in the Diocese of Scranton, was arrested Jan. 30 in North Philadelphia for allegedly possessing a small amount of cocaine. (Police handout photo)

Philadelphia police today announced that a Roman Catholic priest has been charged for allegedly possessing a "small quantity" of cocaine.

James B. Shimsky, a priest in the Diocese of Scranton, was arrested Jan. 30 in North Philadelphia. Narcotics officers saw a man in a silver Jeep Liberty engage in a drug transaction at 10:40 a.m. on the 3300 block of N. 5th Street, police said.

When officers stopped the SUV, police found a small amount of cocaine in the vehicle and charged him with possession of narcotics.

A spokesman for the Diocese of Scranton said Shimsky was ordained in 2001 and most recently served as pastor of St. John Vianney Parish in Scott Township, Lackawanna County.

Since his arrest, Shimsky has been on a leave of absence, said spokesman William Genello.