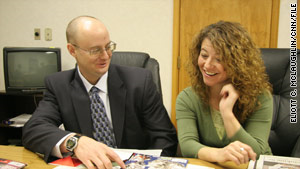 Tim Masters jokes with his attorney, Maria Liu, the day after his 2008 release from prison.

(CNN) -- It won't make up for almost a decade of imprisonment, but a $4.1 million settlement is a "good start," one of Tim Masters' attorneys said Tuesday.

The Larimer County, Colorado, Board of Commissioners voted earlier Tuesday to settle a lawsuit that Masters filed after a judge exonerated him on a murder charge that put him behind bars in 1999.

"There's no dollar figure that's going to give him back his 10 years," said David Wymore, one of the attorneys who represented Masters in the case. "Tim just wishes this never happened to him, but it did."

Masters was 15 when Fort Collins, Colorado, police began investigating him in the murder of 37-year-old Peggy Hettrick, who was found murdered and sexually mutilated in a field near Masters' family home.

He was convicted largely on circumstantial evidence and the testimony of an expert witness who said he fit the profile of a sexual predator. A judge freed Masters in 2008 after new evidence was presented in the case. The crime remains unsolved.

Masters' co-counsel David Lane emphasized there is still a lawsuit pending against the city and that Tuesday's settlement represented only a "good start" to compensating a man who was "framed for a crime he did not commit."

Wymore, who also represented Masters in the criminal proceedings that saw the charges against him dismissed, said he is pleased with the settlement, but feels "someone should apologize to Tim one day because it's not just an accident."

In 1987, a bicyclist found the maimed body of Peggy Hettrick, 37, near the home of Tim Masters.

Masters, then 15, quickly became the top suspect in the slaying, but it was not until 1999 that police and prosecutors saw Masters convicted. He was sentenced to life in prison.

In hearings that began in September 2007, Masters' new defense team alleged police and prosecutorial misconduct in the investigation and trial.

In January 2008, a judge threw out the conviction and freed Masters after DNA evidence pointed to someone else.

Masters, 38, was unable to comment because of the case pending against Fort Collins and some of its police officers. In a statement from his attorney, Masters said he was pleased with the county settlement and eager to conclude the proceedings.

"I would gladly have paid $10 million, or whatever it took, if I could get those years of my life back. Unfortunately, that can never happen," Masters said in the statement.

Kelly DiMartino, a spokeswoman for the city, said Fort Collins is presently negotiating with Masters, but she was unable to share details because it involves pending litigation.

Tuesday's settlement -- $3 million of which will be paid by the county's insurer -- closes the case against the county and two of its judges, Terry Gilmore and Jolene Blair, who were prosecutors in the case that jailed Masters.

A news release said the county had already paid more than $400,000 defending the case and officials believe Gilmore and Blair "handled the Masters prosecution with the utmost professionalism and confidence."

"They would rather have had their day in court," county attorney George Hass said.

The settlement indicates no wrongdoing, explained Hass. Rather, he said, the county was concerned by the prospect of a jury assigning more exorbitant damages. The county decided it would settle for $4.1 million "even though we felt we had a good case to defend," the attorney said.

Hass said he has seen juries dole out damages in excess of $10 million in similar cases, and "that would be a number the county would have to struggle with."

The money should be paid to Masters by February 25, Hass said.

It was 12 years after Hettrick's slaying before prosecutors convicted him and he was sentenced to life in prison.

Police procured no physical evidence in their investigation, and prosecutors relied largely on a collection of knives and gruesome doodles and sketches, as well as the testimony of a forensic psychologist who implicated Masters without ever interviewing him.

He wants to be a normal guy. He wants to get a house, a dog, a car.
--David Wymore, attorney for Tim Masters

Citing DNA evidence that did not implicate Masters, a visiting judge threw out the case in 2008, and Masters walked free.

A year after his release, Masters told CNN he maintained hard feelings for police and prosecutors in the case and said he felt he would have a wife and job if not for the bogus conviction. He was selling items on eBay at the time to earn money.

"They locked me up for a decade for something I didn't do," he told CNN.

Wymore said Tuesday that Masters' eBay income has dried up since he spoke to CNN last year. He is presently living in his aunt's basement and attending school to be recertified as an aircraft mechanic, a job he enjoyed during his eight years in the Navy.

"The settlement allows Tim to re-establish himself as a human being," Wymore said. "He wants to be a normal guy. He wants to get a house, a dog, a car."

http://www.cnn.com/2010/CRIME/02/16/tim.masters.settlement/index.html?eref=ib_topstories
posted by truesee  # 5:57 AM
Comments:
Police and prosecutorial misconduct in the investigation and trial? Imagine that.