When Patrick Morrison left hospital after having his right foot amputated, he thought the sense of imbalance he felt would vanish once he got used to his newly fitted artificial foot.

But it was not until five months later, when he took off the protective socks, that he realised he had been given two left feet.

A prosthetic limb specialist had fitted an artificial left foot to his right leg - and failed to spot his mistake during two further check-ups.

The foot was also too big - made to fit a size nine shoe rather than a size eight.

The specialist, Malcolm Griffiths, was struck off yesterday after admitting a string of blunders.

Mr Morrison, 76, said: 'The paramedics who brought me home saw that I was leaning too much to one side.

'My wife and daughter noticed that as well. I thought it was just part of the process of getting used to having a false foot. I wasn't concerned.'

It was only when Mr Morrison and his wife Alexia decided to change all three protective socks that they realised the mistake.

The retired joiner said: 'We both got a big surprise. Thankfully, the hospital got it sorted out as quickly as they could.'

A disciplinary hearing of the Health Professions Council was told Mr Griffiths admitted 16 charges relating to his treatment of 11 patients at Edinburgh's Astley Ainslie Hospital.

The prosthetist, who was absent from the hearing, was sacked by NHS Lothian in 2008.

Mr Morrison, from Bathgate, West Lothian, said he bore no ill-will towards Mr Griffiths and always got on well with him.

His ordeal began when an ulcer on his big toe grew worse.

Eventually the toe was amputated, but the wound became infected with MRSA and surgeons had to remove the entire foot and part of his lower leg.

He was sent to Mr Griffiths to have a prosthetic limb and shoe fitted.

At the disciplinary hearing in Edinburgh, the panel was told that Mr Griffiths not only admitted the charges against him, but had also requested that he be removed from the professional register.

Its chairman Colin Allies said: 'The panel is satisfied that it is appropriate and proportionate to make the consent order as requested by the parties.'

As well as the charges relating to Mr Morrison, the prosthetist also admitted that he caused 'unnecessary delay and pain' to another patient by failing to complete work 'within a reasonable time-frame'.

A spokesman for NHS Lothian said its senior clinical staff had apologised to Mr Morrison.

He added: 'As soon as issues regarding this former member of staff's competence were raised, we set procedures in place to provide additional support and training.

'He was dismissed in September 2008 following a failure to engage in our competency supervision processes.'

LINK TO PHOTOS OF PATRICK MORRISON: 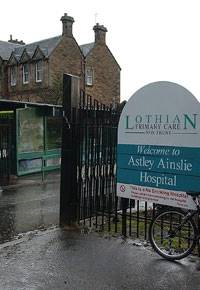 On the other hand, I naturally have 2 left feet.
:)