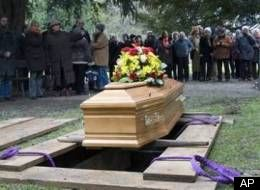 BOGOTA, Colombia — A Colombian woman declared dead of a heart attack moved one of her arms just as an undertaker was about to embalm her, doctors said Wednesday.

Noelia Serna, 45, was rushed to a hospital in the city of Cali, where she was in critical condition in an intensive care unit Wednesday, said hospital director Luis Fernando Rendon.

"Her chances of survival are slim," Rendon said.

Serna, who has multiple sclerosis, was admitted to the same Cali University Hospital on Monday after a heart attack, Rendon said. She survived for about 10 hours on life support, but then seemingly didn't respond to resuscitation efforts following a second attack. She was declared dead early Tuesday.

About two hours later, funeral home employee Jaime Aullon was just about to inject embalming fluid into Serna's left leg when he saw her move.

"She was moving her right arm," he said. "I stopped the procedure and brought her back to the hospital to be treated."

On rare occasions, a person's heart rate and breathing can drop to undetectable levels, leading doctors to erroneously declare a patient dead, said neurosurgeon Juan Mendoza Vega, a member of the Colombian National Medical Ethics Board.

"It can happen," he said. "But it's not a matter of coming back to life because the person was never dead."