WASHINGTON — President Obama is reconstituting the team that helped him win the White House to counter Republican challenges in the midterm elections and recalibrate after political setbacks that have narrowed his legislative ambitions. 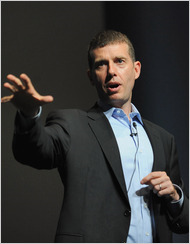 Francois Durand/Getty Images
David Plouffe, who ran the Obama campaign, has been asked to play a bigger role.

Mr. Obama has asked his former campaign manager, David Plouffe, to oversee House, Senate and governor’s races to stave off a hemorrhage of seats in the fall. The president ordered a review of the Democratic political operation — from the White House to party committees — after last week’s Republican victory in the Massachusetts Senate race, aides said.

In addition to Mr. Plouffe, who will primarily work from the Democratic National Committee in consultation with the White House, several top operatives from the Obama campaign will be dispatched across the country to advise major races as part of the president’s attempt to take greater control over the midterm elections, aides said.

“We are turning the corner to a much more political season,” said David Axelrod, a senior adviser, who confirmed Mr. Plouffe’s role. “We are going to evaluate what we need to do to get timely intelligence and early warnings so we don’t face situations like we did in Massachusetts.”

As Mr. Obama prepares to deliver his State of the Union address on Wednesday and lay out his initiatives for the second year of his presidency, his decision to take greater control of the party’s politics signals a new approach. The White House is searching for ways to respond to panic among Democrats over the possible demise of his health care bill and a political landscape being reshaped by a wave of populism.

Improving tactical operations addresses only part of his challenge. A more complicated discussion under way, advisers said, is how to sharpen the president’s message and leadership style.

The reinforcement of the White House’s political operation has been undertaken with a sense of urgency since Tuesday, when a Republican, Scott Brown, won the Massachusetts Senate seat that had been held by Edward M. Kennedy. The White House was caught off guard when it became clear that Democrats were in danger of losing it, and by the time alarm bells sounded from the Democratic Senatorial Campaign Committee, it was too late.

The president summoned Mr. Plouffe to the Oval Office hours before the polls closed and asked him to assume the new role because of the implications the midterm elections hold. Mr. Plouffe built a reputation in 2008 as a master of the nuts and bolts of campaigns, and will assemble a team to provide unfiltered information that serves as an early-warning system so the White House and party officials know if a candidate is falling behind.

The day-to-day political operation will be run by Jim Messina, a deputy White House chief of staff, but Mr. Plouffe will coordinate the effort.

The party is trying to become less reliant on polls conducted by candidates, which can often paint a too-rosy picture of the political outlook. The president’s leading pollster, Joel Benenson, will be among those conducting research for Mr. Plouffe, aides said, along with others who will divide the country by regions.

Mr. Plouffe, who did not follow Mr. Obama to the White House last year, has remained in the president’s tight circle of advisers and has frequently worked on projects for the party.

The first indication of Mr. Plouffe’s more prominent role came in an op-ed article he wrote for the Sunday issue of The Washington Post, presenting a blueprint for how Democrats could avoid big defeats in the fall. He acknowledged the challenges ahead, saying, “We may not have perfect results, but November will be nothing like the nightmare that talking heads have forecast.”

Senator Robert Menendez of New Jersey, chairman of the Democratic Senatorial Campaign Committee, said he had “no interest in sugarcoating” the defeat in Massachusetts. Several party leaders said they expected Mr. Menendez to remain in his position for the rest of the election cycle, but the move by the White House had the effect of subverting at least some of the committee’s authority.

“Our own political operation will be more rigorously in communication with the other elements, so we can compare notes,” Mr. Axelrod said. “What we learned from Massachusetts is that we need to be more assiduous about getting our own data and our own information so we have a better sense of where things stand.”

The White House intends to send Mr. Obama out into the country considerably more in 2010 than during his first year in office, advisers said, to try to rekindle the relationship he developed with voters during his presidential campaign.

His first big chance will come when he delivers his State of the Union address. Rather than unveil a laundry list of new initiatives, advisers said, Mr. Obama will try to reframe his agenda and how he connects it with public concerns. In particular, he will focus on how his ideas for health care, energy and financial regulation all fit into the broader economic mission of creating what he calls a “new foundation” for the country, the key words being “rescue, restore and rebuild.”

While presidents typically experience rough patches, this one is particularly challenging for Mr. Obama. Liberals have grown disenchanted with what they see as his unwillingness to fight harder for their causes; independents have been turned off by his failure, in their view, to change the way Washington works; and Republicans have become implacably hostile.

The long and messy legislative fight over health care is a leading example of how Mr. Obama has failed to connect with voters, advisers say, because he appeared to do whatever it would take to get a bill rather than explain how people could benefit.

“The process often overwhelmed the substance,” said Dan Pfeiffer, the White House communications director. “We need to find ways to try to rise above the maneuvering.”

The discussion inside the White House includes at least two distinct debates: Should Mr. Obama assume a more populist or centrist theme in his message? And should the White House do what it takes to pass compromise legislation or should it force votes, which even if unsuccessful can be used to carry an argument against Republicans in the fall?

It remains an open question how much new legislation will pass Congress, but the coming months will help frame the campaigns. While some form of financial regulation and job creation measures may pass, Obama aides said, larger initiatives like health care, a cap on carbon emissions and an immigration overhaul may have to wait, even though the White House denies trimming its ambitions.

“I wouldn’t say the door is shut on trying to find some places where you can develop a strategy for a bipartisan vote in the Senate,” said John D. Podesta, a former White House chief of staff under President Bill Clinton who advises the Obama team.

But he said Republicans appeared determined to oppose any initiative Mr. Obama offers. “They would try to deny him passing the Mother’s Day resolution,” he said.

Some veterans of the Clinton White House have advised their friends in the West Wing to take a breath and not make lasting decisions in the immediate aftermath of the election, when it might be tempting to overreact.

Rahm Emanuel, the White House chief of staff and himself a Clinton alumnus, gave a pep talk at the senior staff meeting last week. “These things go in cycles,” participants recalled him saying. “We’ve got a lot of work to do. Keep your head up and keep going.”

posted by truesee  # 7:53 AM
Comments:
I was thinking about this some more. When the presidents campaign team takes charge of the campaigns for for those dems running for office does not make that candidate look good. It would appear that the candidate is not bright enough to run their own campaign.
It would seem that the candidate would be indebted to Obama for winning.
Can you say puppet and puppete?