Speaker Nancy Pelosi will use intimidation after political setback

With 60th vote gone, a search for a new strategy 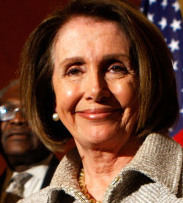 WASHINGTON - Republican Scott Brown’s victory has deprived President Obama and his party of the crucial 60th Senate vote they were counting on to pass a sweeping overhaul of the US health care system in the coming weeks, sending Democratic leaders racing to devise an emergency alternative strategy and creating the very real possibility the effort could collapse.

Democrats were sharply divided over what to do. Some vowed to press on. But a number of others rejected the notion of using parliamentary maneuvers or having the House quickly pass the Senate bill, saying it was time to step back and reevaluate their approach.

“It would be wrong substantively and politically for Democrats to try to pass the bill despite the election,’’ said Representative Barney Frank, Democrat of Massachusetts. “I think we now have to begin some negotiations over a different bill.’’ He said the next step should be to see whether Republicans will make good on their persistent offers to start anew on a bipartisan deal.

The loss of the 60th Senate vote means Democrats will need at least one Republican to accomplish virtually anything on their or the president’s agenda. Relations between the parties have soured to such a degree that even relatively routine matters became full-fledged partisan parliamentary battles late last year.

Failure to enact a health care bill, which the president made his top domestic priority and Congress spent a year pursuing, could be a political disaster of epic proportions for Democrats, casting serious doubt on their ability to govern and further jeopardizing their political position heading into this year’s elections.

And if the legislation dies, there is no telling when any president or Congress might try again to address the problem of the nation’s nearly 50 million uninsured.

“Members will feel there is no political upside for dealing with it,’’ said Ron Pollack, executive director of Families USA and a leading proponent of the overhaul effort. “I think it is now or one or more decades from now.’’

Democratic leaders showed little interest in trying to hurry up and pass a compromise bill based on the House-Senate negotiations of this month before Brown is formally seated.

They also seemed loath to use a special parliamentary process known as “reconciliation,’’ which allows revenue-related items to pass the Senate with a simple majority of 51 votes, to shoehorn through a scaled back, and possibly more partisan, bill. Another route could be for the House to pass the Senate bill, with the understanding that it would be “fixed’’ later using reconciliation.

Representative Patrick Kennedy of Rhode Island, the son of the late Senator Edward M. Kennedy, said he thought this was the best way forward.

“We’ve got to get it done,’’ he said. “To start from scratch and try to cobble something together is politically a very difficult thing to do.’’

House majority leader Steny Hoyer would not comment on the postelection strategy yesterday, but he told reporters, “I think the Senate bill is clearly better than nothing.’’ But the difficulties of engineering such a strategy would be great because House members disagree with the Senate on so many fronts.

House leaders would have to proceed quickly and carefully, gauging whether they could coax enough nervous House members to trust them to fix what they regard as the bill’s flaws.

If anything could make the House leaders’ situation even worse, it would be for the House to try to pass the Senate bill - and fail.

Representative Bart Stupak, Democrat of Michigan and the leader of the antiabortion Democratic contingent in the House, said: “I wouldn’t consider it. Promises don’t make it.’’

Ross Baker, a political science professor at Rutgers University, said House Speaker Nancy Pelosi would have to both reassure members the party will bolster their reelection bids and discipline recalcitrant members.

But some members rejected all of those approaches, arguing the party should take a step back. Frank said, “Any suggestion that Democrats try to get cute with this is a terrible idea.’’

Representative Anthony Weiner, Democrat of New York, said: “When you have large numbers of citizens in the United States of America who believe this is going in the wrong direction, there’s a limit to which you can keep saying that OK, they just don’t get it, if we just pass a bill, they’ll get it,’’ he said.

Len Nichols, a health economist with the New America Foundation, said he still thinks the best way forward for Democrats would be to return to Senator Olympia Snowe, Republican of Maine, and possibly her fellow moderate Maine Republican, Susan Collins, and strike a compromise.

“I know just from interacting with staff on both sides of the aisle that she and Collins engaged in various amendments right up until the end,’’ he said. “I don’t think they are beyond the pale.’’

But others doubted that strategy would work. After Brown’s victory, Republicans would put almost inconceivable pressure on any member of the GOP who would offer political smelling salts to their adversaries.

Susan Milligan of the Globe staff contributed to this report.

posted by truesee  # 6:06 AM
Comments:
...and it doesn't surprise me. They will get down and dirty now, and use every trick in the book. If the majority doesn't want the healthcare bill, they will get it ANYWAY, even if it's forced upon them. Now that's a democracy!

I can't stand Pelosi, she gags me. lol

# posted by LadyMylena : 6:17 AM
I just saw that Anthony Weiner on the tube, he is a downright lying partisan. They try pulling a fast one,   they are done.

# posted by jarasan : 9:44 AM
"Speaker Nancy Pelosi will use intimidation after political setback"