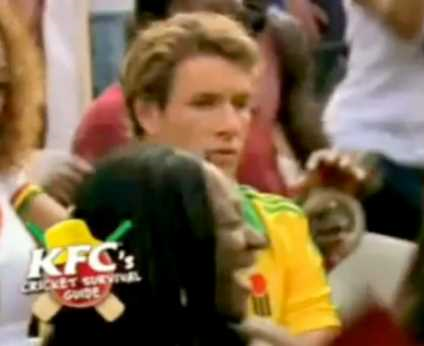 KFC has been making positive moves with its KGC brand, or its grilled chicken. However, in terms of KFC commercial advertising and political correctness, it appears they have a way to go. In reality, though, it's because of a stereotype that doesn't exist in Australia.

This Australian KFC commercial (below) features a white man surrounded by a group of black revelers. To calm the situation, he hands them a bucket of chicken. The KFC commercial, however, is titled "Cricket Survival Guide," and the Colonel's response is that the KFC commercial was meant to celebrate West Indian Cricket team.

In the KFC commercial, the white man asks if "you need a tip when you're stuck in an awkward situation?" as he's surrounded by the revelers. There's no violence involved, just a bunch of people enjoying themselves.

Still, in America, the image of blacks and fried chicken is known as a racial stereotype. "It is a light-hearted reference to the West Indian cricket team ... The ad was reproduced online in the US without KFC's permission, where we are told a culturally-based stereotype exists, leading to the incorrect assertion of racism." The reference to a "culturally-based stereotype" seems to point to the fact that in Australia such a stereotype does not exist, and thus the company would not have caught how un-PC the KFC commercial might appear, to some.

Of course, that doesn't mean racism does not exist in Australia. It does mean that this stereotype does not resonate there, so to that country, the KFC commercial does not appear to exhibit racism.

At any rate, while the KFC commercial has been pulled, it still lives on (until they remove it for copyright reasons) via YouTube

. Watch the KFC commercial and decide for yourself.