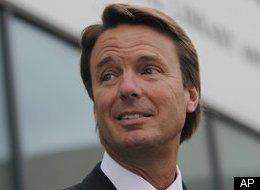 RALEIGH, N.C. — Former Democratic presidential candidate John Edwards finally admitted Thursday he fathered a child during an affair before his second White House bid, dropping long-standing denials just ahead of a book by a former campaign aide who initially took the fall.

Edwards released a statement admitting paternity of the girl, Frances Quinn Hunter, who was born in 2008 to videographer Rielle Hunter as the result of an affair Edwards has already confessed to.

"It was wrong for me to ever deny she was my daughter," he said, adding he was providing financial support for the child and mother. "I am Quinn's father."

The admission comes ahead of the Feb. 2 release of a book by former Edwards aide Andrew Young that is expected to describe how Edwards worked to hide his paternity with Young's help.

Young initially claimed he was the child's father shortly before the 2008 presidential primary contests began. Word that Young was naming Edwards as the father first came when details of his book proposal were reported by The New York Times in September. Edwards' lawyer at the time declined to comment.

The child was born Feb. 27, 2008, indicating that she was conceived in the middle of 2007, several months after Hunter stopped working for Edwards. John and Elizabeth Edwards renewed their wedding vows in July of 2007 to celebrate their 30th wedding anniversary.

Hunter's lawyer, Michael Critchley, said the admission is "good for everyone."

Critchley said Edwards' statement amounted to a public acknowledgment of something that was known privately.

He said Hunter did not have an immediate comment. It is not clear where she and the child are living.

In an excerpt of an ABC News interview released Thursday, Young says that Edwards asked him to arrange a fake a paternity test.

"Get a doctor to fake the DNA results," Young said Edwards told him. "And he asked me ... to steal a diaper from the baby so he could secretly do a DNA test to find out if this (was) indeed his child."

An Edwards spokeswoman declined to comment on the ABC interview.

Elizabeth Edwards, whose cancer returned in an incurable form in March 2007, has stood by her husband despite the affair. She has said that it does not matter to her whether her husband fathered a child with Hunter, saying, "that would be a part of John's life, but not a part of mine."

Harrison Hickman, a longtime friend of John Edwards who worked as his political pollster, said Elizabeth Edwards was supportive of the decision of her husband to come forward.

"She's hoping, like a lot of people are hoping, that its the beginning of the end of the public part of this," Hickman said.

Since admitting the affair in August 2008, Edwards has largely gone into seclusion. He has acknowledged a federal investigation into his campaign finances while both Young and Hunter – with her child – have made appearances at a federal courthouse in Raleigh.

In his statement, Edwards said, "I will do everything in my power to provide her (the child) with the love and support she deserves. I have been able to spend time with her during the past year and trust that future efforts to show her the love and affection she deserves can be done privately and in peace."

Edwards also said, "It was wrong for me ever to deny she was my daughter and hopefully one day, when she understands, she will forgive me."

"I have been providing financial support for Quinn and have reached an agreement with her mother to continue providing support in the future," the statement said. "To all those I have disappointed and hurt, these words will never be enough, but I am truly sorry."

Edwards' attorney, Wade Smith, said Edwards wrestled with the decision to come forward but took so long to do it because "he's not the only person involved in this."

"It's a complex family situation, and he had to keep in mind that other people have concerns and worries about it," Smith said.

Smith said there would never be a logical explanation for why Edwards initially denied being the father. But he added that Edwards was "very pleased" to finally set the record straight.

"To say that life has been hard for John Edwards for the past year would be an enormous understatement," Smith said. "His life has totally fallen apart. It's been a very difficult time for him. He recognizes that he has been at fault."

Edwards, a former U.S. senator representing North Carolina from 1998 until his vice presidential bid in 2004, acknowledged in May that federal investigators were looking into how he used campaign funds. Grand jury proceedings are secret, and the U.S. attorney's office in Raleigh has declined to confirm or deny an investigation. Smith declined to comment Thursday about the probe.

Edwards adamantly denied during an interview with ABC News last summer that he had fathered a child with Hunter, and he welcomed a paternity test. He said then that the affair had ended in 2006. That year, Edwards' political action committee had paid Hunter's video production firm $100,000 for work.

posted by truesee  # 1:25 PM
Comments:
Another Democrate dumba$$ with his pants down.