A Polish beekeeper pronounced dead after he suffered a suspected heart attack was about to be sealed up in a coffin when a funeral director miraculously discovered a faint pulse.

Jozef Guzy collapsed as he started work among his beloved hives near the southern city of Katowice.

An ambulance was called and an experienced doctor declared that the 76-year-old had died.

Jerzy Wisniewski, a spokesman for the Regional Ambulance Service in Katowice, said: 'The patient was not breathing, there was no heart beat, the body had cooled - all are the characteristics of death.

As Mr Wysluchato fiddled with the watch chain he happened to touch Mr Guzy's neck and detected a pulse.

He said: 'I touched around the neck artery and suddenly realised he asn't dead after all. I checked again and shouted, "It's a pulse!"

'I had a friend check and he noticed the man was breathing. God, it was a miracle!"

The ambulance was called again and the same doctor returned. He confirmed the pensioner had 'come back from the dead'.

Mr Guzy was taken to hospital where puzzled doctors failed to find anything wrong with him.

After a few days rest, he was sent home.

Mr Wysluchato said: 'Thank God I did not close the coffin - if I had done that it would have been a tragedy.

'Something touched me to touch his neck - I'm so pleased he's alive.'

His wife, Ludmila, said: ‘I could not believe it when they said he was dead. The doctor put a white sheet over him and three hours later local undertakers pulled up.’

Mr Guzy added: ‘The undertaker saved my life. The first thing I did when I got out of hospital was take him a pot of honey.’ 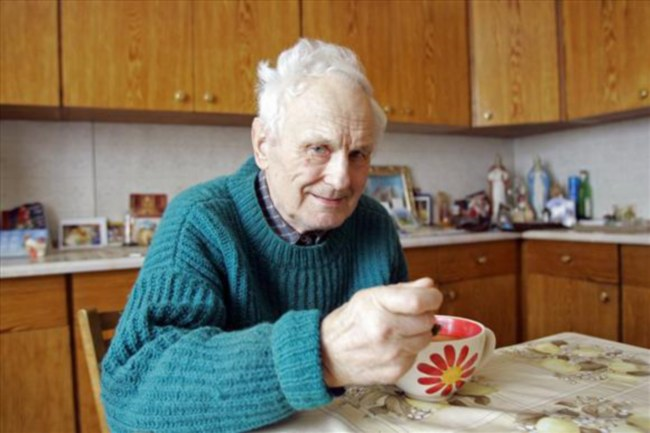 Alive and well: Jozef Guzy was declared dead by a doctor after he collapsed 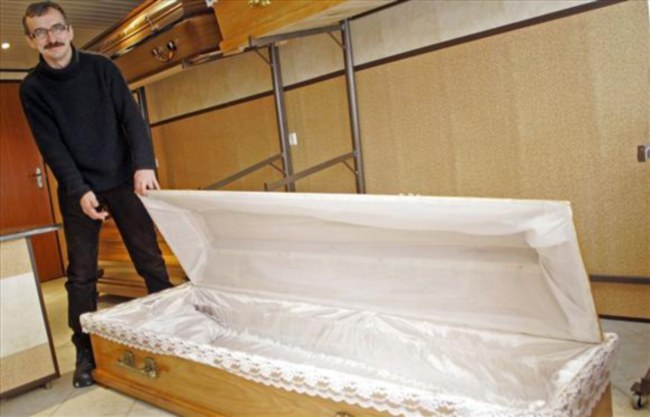 Discovery: Funeral director Dariusz Wysluchato with the coffin he was about to seal when he happened to detect Mr Guzy's pulse and so was able to rescue him

# posted by fwlawrence : 5:41 PM
Holy cow!! That's SCARY!! Especially if there ends up not really being anything wrong with you, and you wake up buried in a casket. Gahhh! I think that's a big fear of mine. I also have a fear that someone will try and cremate me, and I will not be dead, and not be able to tell them. :-(