Evander Holyfield and Botha to fight in Uganda

Organizers of the fight in Kampala's Nambole Stadium said on Thursday that both fighters had signed contracts. A turnout of about 80,000 fans was predicted.

"I am very much looking forward to going to Uganda and I expect a tough fight against Francois Botha," Holyfield said. "I am going to win and I will cherish the WBF world title."

Holyfield (42-10-2) has not fought since losing a points decision to Nikolai Valuev a year ago. The 47-year-old American, also a former cruiserweight champion, believes a victory could give him a shot at a more prestigious title that would allow him to achieve his goal of retiring as a heavyweight champion.

Holyfield has earned more than $200 million in the ring, including a reported $34 million for his second bout with Mike Tyson in 1997. That was the "Bite Fight" that ended with Tyson being disqualified for chewing off a chunk of Holyfield's ear.

Holyfield also beat Larry Holmes, lost two of his three contests with Riddick Bowe, drew with and then lost to Lennox Lewis and had a win-lose-draw sequence against John Ruiz.

Three defeats in a row — to Chris Byrd, James Toney and Larry Donald — accelerated his decline, and Holyfield was out of the ring for 21 months before returning in August 2006 to start a run of four straight wins.

Holyfield's last two fights were losses to Sultan Ibragimov and then to Valuev, a majority decision he disputed. Since then, Ibragimov has retired and Valuev surrendered his WBA title to David Haye.

Botha (47-4-3) has lost to Tyson, Lewis, Wladimir Klitschko and Michael Moorer, but retained his WBF title by drawing with Pedro Carrion of Cuba in Germany in October.

"I have always been my own harshest critic. My performance against Carrion, without making any excuses, was arguably the worst of my career," the South African said.

"Expect the fittest, toughest and best ever — and extremely serious — Francois Botha in Uganda in January. I owe my fans and members of Team Botha the performance of my life. I intend to make good on that." 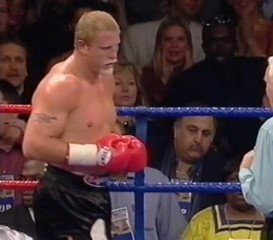