Humans Are BornTo Believe In God

Humans are hardwired to believe in God, say scientists


Humans are born with an innate ability to believe in God which has been passed down through thousands of years of evolution, new research has suggested.

Scientists stumbled on the idea after studying the way children’s brains develop, as well as how the brain works during religious experiences.

They suggest that during evolution, groups of humans with religious beliefs, perhaps because they tended to work together better - and therefore stood a greater chance of survival. 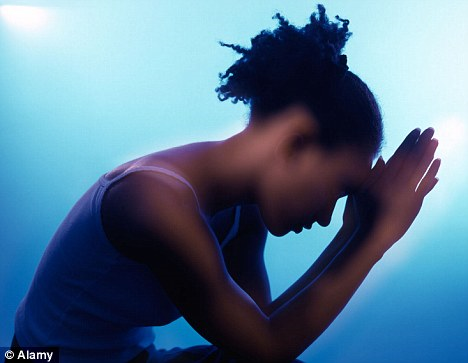 All in the mind: Scientists have claimed we are born to believe in God

The findings, reported in The Sunday Times, suggest that children are born with a natural inclination to think about faith and the supernatural about the world we live in.

It deals a blow to the beliefs of atheists who campaign against organised religion, like Richard Dawkins, author of The God Delusion.

He has long argued that religious beliefs result from poor education and childhood 'indoctrination'.

However, Bruce Hood, professor of developmental psychology at Bristol University and author of the new study, believes the picture is far more complex.

He said: 'Our research shows children have a natural, intuitive way of reasoning that leads them to all kinds of supernatural beliefs about how the world works.

'As they grow up they overlay these beliefs with more rational approaches but the tendency to illogical supernatural beliefs remains as religion.'

Mr Hood will present his findings at the British Science Association’s annual meeting later this week.

He says organised religion is just part of a wide spectrum of supernatural beliefs.

In one study he found even ardent atheists balked at the idea of accepting an organ transplant from a murderer - because of a superstitious belief that an individual’s personality could be stored in their organs.

'This shows how superstition is hardwired into our brains,' he said.

His work is supported by other researchers who have found evidence linking religious feelings and experience to particular regions of the brain. 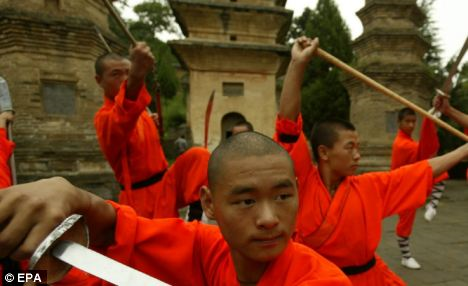 Religious feelings: Shaolin monks who practise meditation have been linked to showing religious sensations in parts of the brain

They suggest people are programmed to get a feeling of spirituality from what is nothing more than electrical activity in these regions.

Andrew Newberg, professor of radiology at the University of Pennsylvania, has used brain-imaging techniques to show that such feelings are invoked by activity in 'belief networks' operating across the brain.

This supersedes the earlier concept of a 'God spot', activated during meditation or prayer.

'The temporal lobe interacts with many other parts of the brain to provide the full range of religious and spiritual experiences,' he said.

This mechanistic view of religious experience is reinforced by separate research carried out by Michael Persinger of Laurentian University, Ontario.

Barbara Hagerty became one of Persinger’s subjects while researching Fingertips of God, a book on brain processes underlying religion.

'I saw images and cartoonish figures,' she said.

'It didn’t convince me there was no God, but it did show me how much the brain is connected to our beliefs and perceptions.'

Some researchers argue that humans’ innate tendency towards supernatural beliefs explains why many people become religious as adults, despite not having been brought up within any faith.

Scientists believe that the durability of religion is in part because it helps people to bond.

Professor Pascal Boyer, an anthropologist at Washington University and author of Religion Explained, supports Hood’s view that the origins of religion may lie in common childhood experiences.

'It is a small step from this to conceptualising spirits, dead ancestors and gods, who are neither visible nor tangible.'

Boyer says he holds out little hope for atheism.

'Religious thinking seems to be the path of least resistance for our cognitive systems,' he said.

'By contrast, disbelief is generally the work of deliberate, effortful work against our natural cognitive dispositions — hardly the easiest ideology to propagate.'

The Rev Michael Reiss, who is professor of science education at London University’s Institute of Education and also an Anglican priest, said he saw no reason why such research should undermine religious belief.

'I am quite sure there will be a biological basis to religious faith,' Reiss said.

'We are evolved creatures and the whole point about humanity is that we are rooted in the natural world.'