A cushioned trainer has long been the most important item in the wardrobe for any runner keen on preserving his feet and joints.

But that could all be about to change as a craze for new running socks that mimic what it would be like to be barefoot is starting to take hold.

The FiveFingers brand has been taking off in America ever since they were named one of the best inventions by Time magazine back in 2007.

And now their fame has spread across the Atlantic, with a British osteopath Matt Walden starting to use them here to help rehabilitate his patients.

They have become the subject of huge chatter on the internet and the micro-blog site Twitter as the idea of running without trainers takes hold. 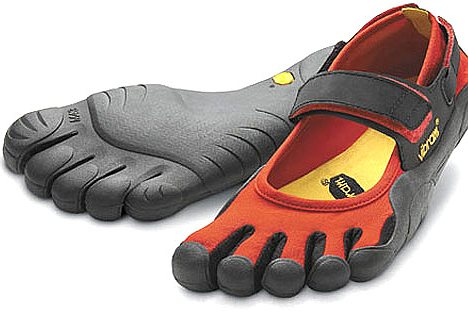 Revolutionary: A pair of FiveFingers that mimic the sensation of being barefoot that are shaking up the running world

On Twitter, one poster wrote this week: 'Just got a pair of Vibram FiveFingers - I think my whole running world is about to change.'

Another added: 'First half-mile in my Vibram FiveFingers - Oh my god - How could I *ever* run in anything else?! They are sooo good.'

Professional athlete Helen Pryer, one of Britain's top 200 metre runners who is coached by Linford Christie, is also a fan.

'I just find them really comfortable so I use them for my spring training and during gym training. I prefer them to flat shoes and spikes,' she told the Sunday Times.

The ultra-thin socks made from hard-wearing neoprene are said to help prevent injuries including ankle sprains and sore knees and sell for around £80.

They are like gloves for feet that basically give the sensation of being barefoot while still protecting the skin.

Manufacturers say they act like a second skin and force the wearer to land on the centre of the foot and not the heel which fits with natural balance.

They have been developed on the premise that trainers - which can often be bulky - sometimes cover up problems because they cushion the foot so much.

The thin rubber has separate toe sections - hence the name FiveFingers - and have been doing brisk trade in running and athletics circles.

Vibram is an Italian company and when they first designed the 'shoes', they were aiming them at sailors, yoga fans and kayakers.

But they have proved hugely popular with runners and even professional athletes as the idea catches on.

Chief executive Tony Post, who uses them himself, told the San Francisco Chronicle: 'It used to be all about adding more. Now, we're trying to strip a lot of that away.'

Vibram says sales of the 'shoes' have tripled every year since they were first launched back in 2006. It expects to make $10million from sales in North America this year.

Experts are cautious, however, about whether runners should ditch their trainers just year - warning that any change to a regime should be made with care.