Star Arrested Over $1.20 in Change

NHL Star Arrested Over $1.20 in Change 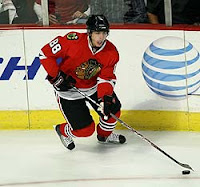 Oh, oh. Is this another example of a celebrity of any type feeling entitled? Patrick Kane, hardly a household name outside of the NHL, was arrested over a taxicab incident.

According to reports, Patrick Kane was arrested for allegedly punching a cabbie in the face and failing to pay his cab fare, all over $1.20 in change. Kane, 20, and his brother James, 21, were in their home town of Buffalo, NY, when the incident occurred.

The issue: the cabbie told the Kanes that he didn't have the change to give them their full $1.20. He apparently did not have twenty cents in coins. This angered the two, who struck the cabbie in the face, breaking his glasses, and took the money back. Their fare was $13.80 and they handed the driver $15.

Patrick Kane was the top overall pick in the 2007 draft. You'd figure, even though the NHL obviously lags behind other sports in salaries, that a $1.20 tip (which was already lame) nothing to him, and definitely better than being Patrick Kane winding up arrested.

WIVB-TV in Buffalo reported that an attorney for Kane has entered a plea of not guilty on his behalf in a city court. The charges Patrick Kane was arrested for include second-degree robbery (a Class C felony), fourth-degree criminal mischief and theft-of-services charges (both Class A misdemeanors).