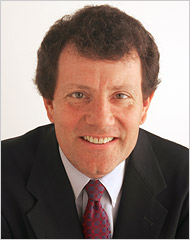 At a time when we Americans may abandon health care reform because it supposedly is “too expensive,” how is it that we can afford to imprison people like Curtis Wilkerson?

Mr. Wilkerson is serving a life sentence in California — for stealing a $2.50 pair of socks. As The Economist noted recently, he already had two offenses on his record (both for abetting robbery at age 19), and so the “three strikes” law resulted in a life sentence.

This is unjust, of course. But considering that California spends almost $49,000 annually per prison inmate, it’s also an extraordinary waste of money.

Astonishingly, many politicians seem to think that we should lead the world in prisons, not in health care or education. The United States is anomalous among industrialized countries in the high proportion of people we incarcerate; likewise, we stand out in the high proportion of people who have no medical care — and partly as a result, our health care outcomes such as life expectancy and infant mortality are unusually poor.

It’s time for a fundamental re-evaluation of the criminal justice system, as legislation sponsored by Senator Jim Webb has called for, so that we’re no longer squandering money that would be far better spent on education or health. Consider a few facts:

¶The United States incarcerates people at nearly five times the world average. Of those sentenced to state prisons, 82 percent were convicted of nonviolent crimes, according to one study.

¶California spends $216,000 annually on each inmate in the juvenile justice system. In contrast, it spends only $8,000 on each child attending the troubled Oakland public school system, according to the Urban Strategies Council.

¶One in 10 black men ages 25 to 29 were imprisoned last year, partly because possession of crack cocaine (disproportionately used in black communities) draws sentences equivalent to having 100 times as much powder cocaine. Black men in the United States have a 32 percent chance of serving time in prison at some point in their lives, according to the Sentencing Project.

Look, there’s no doubt that many people in prison are cold-blooded monsters who deserve to be there. But over all, in a time of limited resources, we’re overinvesting in prisons and underinvesting in schools.

Indeed, education spending may reduce the need for incarceration. The evidence on this isn’t conclusive, but it’s noteworthy that graduates of the Perry Preschool program in Michigan, an intensive effort for disadvantaged children in the 1960s, were some 40 percent less likely to be arrested than those in a control group.

Above all, it’s time for a rethink of our drug policy. The point is not to surrender to narcotics, but to learn from our approach to both tobacco and alcohol. Over time, we have developed public health strategies that have been quite successful in reducing the harm from smoking and drinking.

If we want to try a public health approach to drugs, we could learn from Portugal. In 2001, it decriminalized the possession of all drugs for personal use. Ordinary drug users can still be required to participate in a treatment program, but they are no longer dispatched to jail.

“Decriminalization has had no adverse effect on drug usage rates in Portugal,” notes a report this year from the Cato Institute. It notes that drug use appears to be lower in Portugal than in most other European countries, and that Portuguese public opinion is strongly behind this approach.

A new United Nations study, World Drug Report 2009, commends the Portuguese experiment and urges countries to continue to pursue traffickers while largely avoiding imprisoning users. Instead, it suggests that users, particularly addicts, should get treatment.

Senator Webb has introduced legislation that would create a national commission to investigate criminal justice issues — for such a commission may be the best way to depoliticize the issue and give feckless politicians the cover they need to institute changes.

“There are only two possibilities here,” Mr. Webb said in introducing his bill, noting that America imprisons so many more people than other countries. “Either we have the most evil people on earth living in the United States, or we are doing something dramatically wrong in terms of how we approach the issue of criminal justice.”

Opponents of universal health care and early childhood education say we can’t afford them. Granted, deficits are a real constraint and we can’t do everything, and prison reform won’t come near to fully financing health care reform. Still, would we rather use scarce resources to educate children and heal the sick, or to imprison people because they used drugs or stole a pair of socks?