Bride's Wedding Dress Train Takes 3 Hours To Unroll and Pin 9,999 Roses On It

A Chinese bride has made a bid for the record books when she turned up for her wedding wearing a 1.4 mile-long gown. 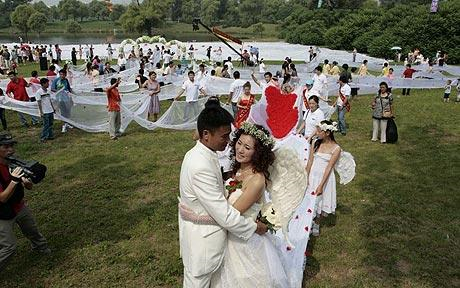 Zhao Peng, the groom, and his family spent over two months stitching together the trail of the dress to break the former Guinness World Record for the longest wedding dress which is 1,579 meters long displayed in Bucharest, Romania earlier this year Photo: BARCROFT

Aerial view of length of the train of a wedding dress Photo: REUTERS

Aerial view of length of the train of a wedding dress Photo: REUTERS

"Both the length of the dress and the number of silk roses pinned on the wedding dress can make history. But it doesn't matter whether I can successfully register it on Guinness," the 28-year-old railway worker from northeast Jilin province was quoted as saying.

Zhao said he had sent an application to Guinness World Records and would also send a video of his wedding with his 25-year-old school teacher.

"I do not want a cliche wedding parade or banquet," the groom said, "nor can I afford the extravagance of a hot balloon wedding."

"It is a waste of money in my opinion," his mother said. "Though I understand that he wants to show his love on the big day."

Lin Rong, the bride, laughed and cried at the romantic gesture.

Zhao said he was actually inspired by the world's record of the longest wedding dress made in Romania in April when he planned his wedding.

He bought the materials and asked his relatives for help in making the wedding dress by hand, which has taken three months to finish.